“Something's odd here, but I can't put my finger on it.”

“What's a weird table doing out here? Let's burn it!”

“Wolfgang has no use for tiny table.”

“My heart aches with its beauty.”

“Something devious is lurking in the shadows.”

“This must be the work of an unseen hand.”

“Is there a spider friend rustling beneath?”

“Oh, what a nice table setting.”

“Why's this table givin' me the creeps?”

“I know you're hiding in there.”

The Stagehand is a naturally spawning object in Don't Starve Together, introduced in A New Reign. It spawns in a circle of 5 Roses. The Stagehand seems to have something moving under it resembling a Night Hand. At night, the creature's legs creep out from under the table and search for a light source in its vicinity. The Stagehand will only be attracted to sources that produce fire, like Campfires and Torches. If the player gets too close to the table when it is visible at night, the creature will go back under the table. Characters have different quotes when the "creature" is standing. It cannot be destroyed, but hammering it 86 times (requiring 2 Hammers) will make it drop an End Table Blueprint (which can be dropped multiple times), used to craft the End Table. However, the count will reset if 15 seconds pass between two Hammer strikes in the same way HP of Fences, Chests and other buildings resets 15 seconds after being struck.

If the Stagehand starts burning, or if it gets close to a fire, a Night Hand will come out from under the tablecloth to extinguish the flames.

“Just a bunch of dumb flowers.”

“We pulled the flowers from their homes for our own amusement.”

“MY UNDERLINGS LIKE IT, DESPITE THE LACK OF FUNCTION”

“It's pleasant to see a little decor out here.”

“A little bit of nature makes everything nicer.”

“Pretty sure this one won't move.”

“I never learned my table manners.”

“Is somebody decorating out here?”

“I make it a rule not to trust fancy tables I find in the wilderness.”

The End Table is a structure that looks exactly like the Stagehand, except it excludes the shadow legs and is completely static.

Unlike the Stagehand, the End Table is craftable, and can be either burnt down, turning into Ashes, or hammered to drop half of its crafting items. The player can place any kind of Flower in the vase on the table. This includes Lune Tree Blossoms, Light Bulbs, Glow Berries and Forget-Me-Lots. Doing so will grant the player 5 sanity. Placed Light Bulbs and Glow Berries will provide light. After ten days, the potted flower will wilt.

There are eight variaties of Flowers, three variaties of Light Bulbs, and two variaties of Forget-Me-Lots showing up in the vase when the player decorates the structure using the corresponding items.

End Table as seen in the poster for the A Little Fixer Upper update.

A Stagehand putting out its own fire 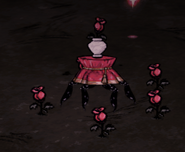 A stagehand with its legs out at dusk.

The walking animation of a Stagehand.