"See across the sea."

Reveals a portion of the Map.

“You can't hide from me now, islands!”

“To peer over the horizon with an unabiding longing.”

“It collects visible light to better my vision.”

“This may help me get the lay of the land.”

“What trickery is this?”

“You can't hide from me, islands!”

“I could see farther that this if I was up in my balloon.”

The Spyglass is a craftable Nautical Tab Item in the Shipwrecked DLC. It requires a Science Machine to prototype and is crafted using 1 Empty Bottle, 1 Pig Skin, and 1 Gold Nugget. It is also a reward from the Yaarctopus in exchange for Ceviche.

When equipped, it can be peered through to reveal a cone-shaped portion of the map in the direction the player clicks with Right Mouse Button (RMB).

The range Spyglass will reveal changes by the time of Day, farthest being during day time. The range is also reduced on boats, and during Hurricane Season.

Reveals a big portion of the Map.

“I can see forever!”

“I can see to the ends of the earth.”

“I can see so much more useless nothing.”

“As easy as looking over the plains of Alberta.”

“This may help me get the lay of the land.”

“The refraction properties of that lens is astonishing!”

“Ödin has lent me his eye!”

“Helps us see better than with all our eyes, combined!”

“I knew sharks had an exceptional sense of smell, but their vision!”

“I can almost see all the danger from here.”

The Super Spyglass is a better version of the Spyglass with doubled map reveal range. It can be crafted using a Spyglass, an Eye of the Tiger Shark and a Gold Nugget. It requires a Science Machine to prototype and can be blown away by Strong Winds.

The range reduction while on a boat doesn't apply to it, but the range is still affected by the time of day.

Either version can be found in X Marks the Spot treasure chests.

In the Hamlet DLC, there is a chance for Spyglass to spawn in a Secret Bandit Camp. 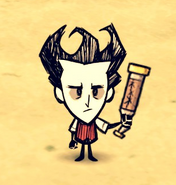 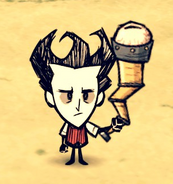 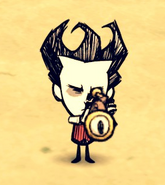 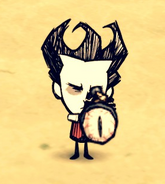 Walani using a Super Spyglass, as seen in the Shipwrecked trailer.

Super Spyglass as seen in the poster for the Eye of the Tiger Shark update.
Community content is available under CC-BY-SA unless otherwise noted.
Advertisement