50%, Any stolen items in its Inventory

“Living without the burden of intelligence must be nice.”

“AN EVEN DUMBER HUMANOID.”

“They produce quite an odor.”

“Akin to its earthly kin.”

“He just wants to learn!”

“You think he can surf?”

“A new species of irritation.”

“Me once saw a monkey wit' a hook claw.”

“I can launch things too, you know.”

“No monkeying around on the job.”

“I've only ever seen them in zoos!”

“They're up to their old tricks.”

Splumonkeys are neutral Mobs found in the Ruins. They live in Splumonkey Pods. They will follow players, stealing items on the ground and looting containers. When killed, they drop any stolen items, 1 Morsel, 1 Cave Banana, and possibly 1 Nightmare Fuel.

Splumonkeys pick Bananas from Cave Banana Trees, Berries from Berry Bushes, and any Mushrooms in sight. They will harvest crops from Farm plots, steal items from Chests, Ice Boxes, Backpacks, Chester, Hutch, and Woby, plus take Food from Crock Pots. If they pick up a Hat, they will wear it. The hat will give the same benefits to the Splumonkey as a player (a Miner Hat will provide light, a Football Helmet defense, etc.), and will lose durability at the same rate a player would.

Like many other neutral mobs, if one Splumonkey is attacked, all nearby Splumonkeys will become aggressive toward the attacker. Splumonkeys defend themselves by throwing Manure at a distance or biting enemies that come within melee range. Being hit by Manure causes damage (0 health will be lost however) and lowers Sanity by 10 points. Splumonkeys can hold a maximum of three Manure, and eating Food items will replenish this count. They prefer to run from any attacker and throw any Manure they have from a distance, so the player may need to corner a Splumonkey in order to get close enough to hurt it with melee weapons.

On occasion, Splumonkeys will follow the player, especially if the player has a Cave Banana in their inventory. Unlike other followers, Splumonkeys do not assist but only harass.

If Splumonkeys are on the surface and homeless or too far away from their pod, they will sleep at daytime and wake up at dusk or upon being attacked.

Aggravated Shadow Splumonkeys will chase the player until death, or until the they transform back into normal ones.

Below is the number of hits it takes with each weapon to kill a Splumonkey. Splumonkeys take 2 blasts from the Ice Staff to be frozen and 1 Sleep Dart to be put to sleep.

A size comparison of Splumonkeys next to Wilson.

Two Splumonkeys, with one about to battlecry. 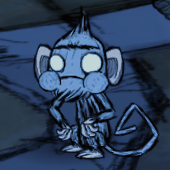 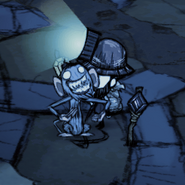 A Splumonkey stealing an Ice Staff from Wilson. 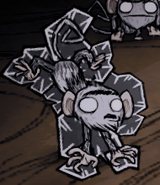 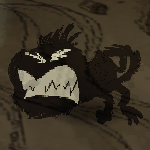 A Splumonkey using its bite attack.

A Splumonkey throwing Manure at Wilson. 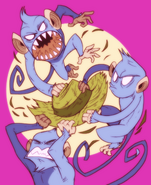 Splumonkeys as seen in a drawing from Art Stream # 85. 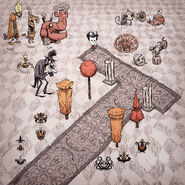 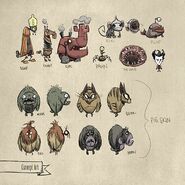