“It's chewing on something.”

“An arachnid that spits projectiles.”

“It appears arachnids here don't spin webs from their posterior.”

“Lay down some web for us.”

“I reckon I can spit further than ye.”

“You're not making any friends with your attitude.”

“Pfft, I can spit further than that!”

“Do you spit your goop at me sir?”

Spitters are a Cave-dwelling variety of Spiders, which can spit web-projectiles as well as bite. They spawn from Spilagmites along with Cave Spiders. Like Cave Spiders, Spitters will utter low pitched roars as opposed to other spiders high pitched gurgling cries.

Spitters have the same drops as all spiders: Spider Gland, Silk, or Monster Meat. They take one hit from the Ice Staff to be frozen.

Spitters are unique among Spiders because they have the ability to shoot webbed balls at the player very rapidly. This makes spelunking very dangerous as it is hard to get within melee range. The projectiles can be dodged, but they are very fast and have a small splash radius.

As with regular Spiders and Spider Warriors, when the player or another enemy is close, instead of shooting, Spitters will instead snap at their target, making them easier to kill. Also like other small spiders, they have a scared-looking animation when they're exposed to a large light source.

Spitters cannot be stun-locked, which makes them very dangerous to try to kill without armor or when there's more than one.

In the Reign of Giants DLC, Spitters are neutral to Webber and can be befriended with Meats by him.

Because of Spilagmites' low spider count and the spitter's low damage output, the player can simply tank the attacks and kill the spider with a Log Suit or better.

However, if the player desires to avoid any damage, the best way to dodge a Spitter's webbed spit is to run at right angles to it, though they will still sometimes hit the character anyway if the Spitter is close enough.

It is recommended to use a ranged weapon on Spitters, to give the player more time to dodge the webbing. However, it may be easier to kite with a melee weapon if there is only one Spitter to fight, treating it as a Spider Warrior. Dodge its bite, then hit it a few times before it bites again.

Spitters (and other Spiders) can be caught by Traps and will drop their normal loot when murdered.

Spitters along with other Spiders will follow a character that is currently wearing a Spiderhat. However, caution must be taken as the Spiderhat decreases Sanity, which can be difficult to manage since it is always considered 'Night' underground. Also, it is important to watch the Spiderhat's durability level as the Spitters and Cave Spiders will become hostile when it runs out.

Below is the number of hits it takes with each weapon to kill Spitters when playing with characters with a default damage modifier. The Weather Pain is not included due to the random nature of its projectile.

A Spitter in motion.

Spitter as seen in the poster for the Underground update. 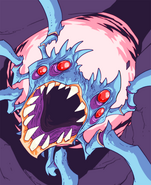