“I hope I got all of the spider goo out of it.”

“Time to stare into the abyss.”

“IT WIRELESSLY TRANSMITS THOUGHTS TO SPIDERS”

“With this I should be able to exert psionic control over the spiders.”

“Spiders have such malleable wills.”

“FOR SPIDERS TO LEND WILBA THEIR EARS”

“It'll be all the rage in the murky places.”

“Woby keeps growling at me when I wear it...”

“A lovely reminder of that time I was almost eaten by a giant spider.”

The Spiderhat is a Hat Item dropped by Spider Queens that allows the player to control Spiders. This also works for all the Spiders in Caves, but they will not follow the player in or out of the caves. However, Spider Queens will see through this disguise and will attack the player regardless. The hat only lasts for 2 minutes (6 game hours), degrading while equipped.

While wearing the Spiderhat, all Pigs and Bunnymen as well as following Smallish Tallbirds will see the player as an enemy and attack. However, giving a hat to a Pig or Bunnyman has no effect on it or surrounding others of their kind.

The player cannot sleep (e.g. with a Straw Roll) when controlling Spiders, as the game will consider this "too dangerous".

In the Reign of Giants and Shipwrecked DLCs, the Spiderhat provides 20% water resistance during Rain.

In Don't Starve Together, the Spiderhat can be deconstructed using a Deconstruction Staff for 4 Silk, 2 Spider Gland and 1 Monster Meat.

The Spiderhat is a great tool for quickly farming large amounts of Silk and Spider Glands. For this to work all that is needed are 3-4 Spider Dens and a Spiderhat. At Dusk when Spiders come out to roam - briefly equip the Spiderhat to recruit some Spiders and order them to attack one of the unaffected Spiders that is near a Den, then move out of their aggro range and unequip the hat to conserve its durability. This will result in a Spider "civil war", where non befriended Spiders will attack the previously befriended ones and result in a snowball effect.

The downside is that all Monster Meat will be eaten quickly, so only Silk and Glands will be acquired using this method. Spiders respawn quickly and if there are several Tier 3 Dens around, this can be repeated at Dusk everyday.

This method is also very efficient for clearing out large amounts of Spiders and destroying Dens (clearing Spider-infested Rockyland for example).

Spiders fighting each other and attacking a Den. 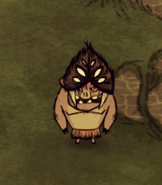 A Pig wearing a Spiderhat.

Other Pigs are unaffected by a Spiderhat-wearing Pig.

Spiderhat as seen in the poster for the Long Live the Queen! update.
1/22
Français Tiếng Việt
Community content is available under CC-BY-SA unless otherwise noted.
Advertisement