“Looks even meaner than usual.”

“This one extra scary.”

“A warrior of the night!”

“It appears to be of the warrior caste.”

“They come in yellow now?”

“It's a specialized form.”

“Interesting! This species of arachnid has somehow developed a variant which serves in nest protection.”

“Can you teach us to fight good?”

“Does this mean you are even more warlike than the others?”

“You'll look better on the underside of my workboot.”

“Look at the colouring on that one!”

“Oh botheration, I hate the stripy ones.”

Spider Warriors are dangerous protectors of Spider Dens. They are stronger and slightly larger than Common Spiders, able to leap a considerable distance to attack threats. They are only ever seen when a medium- or large-size Spider Den is attacked, or when a Spider Queen detects a threat nearby.

When a Spider Den is attacked directly, or when it senses that a nearby Spider was attacked, several Spiders and Spider Warriors come out growling and chase the threat away. (In the Reign of Giants DLC, a "nearby Spider" is one just on the sticky webbing.) After chasing the offending monster, player, or pig too far from their den, Spiders will prefer to return home, though Spider Warriors are willing to chase things farther and to even stand guard outside until the next morning.

Angered Spider Warriors attack by snapping at their targets or even by leaping at them from considerable distances.

Spider Warriors can be valuable allies to Webber, as they attack both monsters and animals while completely regarding him as one of their own. He can lead angry masses of foes to a Spider Den and the spiders will fight at his back (or he can watch the two sides destroy each other). Either way, he should collect drops quickly before the spiders eat them, and he should be careful not to hit them.

Webber can build his camp with Spider Dens nearby as extra protection from Hound and Batilisk attacks.

Spider warrior's leaping attack is particularly useful for killing things that tend to run from the player and spiders, having one as a follower will pick off butterflies, having two will allow you to kill rabbits, and having three will let you easily kill gobblers, these can be done without wasting any resources other than a bit of meat, which can be a good way to gather more meat and butterfly drops while on the go as long as you pick up the meat quickly.

Spider Warriors are faster than common Spiders, have twice as much health, and cannot be stunned. It usually takes a half-dozen or more hits to kill one, and it takes fast dodges and rapid strikes to kill them without being wounded. Fighting on a Road or carrying a Walking Cane is recommended. Spiders usually can't outrun a target in full flight beyond their den's sticky webbing.

Spider Warriors' leaps can be dodged by Players who are quick enough to get out of the way. After a Spider Warrior has attacked, it cannot strike again for a moment, creating an opportune time to strike 7 or 8 times.

As long as the player is within the melee range of the Spider Warrior, it will not use its jump attack and use its normal bite attack.

Spider Warriors are vulnerable to Traps, even getting caught in them as they leap through.

Below is the number of hits it takes with each weapon to kill Spiders when playing with characters with no damage modifier. (The Weather Pain is not included due to the random nature of its projectile.)

Although Spiders are a dangerous foe early on and a constant nuisance later on, a properly tended-to Spider Den can become a useful source of Spider Glands, Monster Meat, and Silk. Spider Glands are an important healing ingredient, used in Healing Salves, Telltale Hearts, and, Wendy's Revenant Restorative. Monster Meat, used sparingly, can be a meaty ingredient in Crock Pot recipes. Silk is a vitally important resource for surviving the cold Winter, but it's also necessary for fishing, beekeeping, birdkeeping, and (by extension) controlled agriculture. All of these things make them a prime candidate for farming, which can be done fairly easily.

A word of caution to the unwary: A den mustn't be left unattended for too long, or it might grow legs and walk off. A mature, overgrowing Spider Den can turn into a Spider Queen, who walks away leaving the old den behind, and plant itself in a new location as a fresh den. The queen is very dangerous, and she can overrun an entire base. Mature Spider Dens should be knocked down and replanted to avoid the risk of ever seeing a queen.

Spider Eggs can be recovered from mature Spider Dens when destroyed. Simply planting one or two of these inside enclosed walls will usually be sufficient containment, as Spiders will not often try to break walls. (If they do, they usually won't succeed before night falls.)

With an enclosure established, a method of killing is needed. One way is to set the enclosure around a Tentacle, something deadly that Spiders will quickly go to attack after they emerge. Spiders can be sent wave after wave against a Tentacle with little to no effect, and they'll disregard drops from slain Spiders. However, the Player should beware of the Tentacle when picking up the drops.

Spider Warriors in the Shipwrecked DLC are larger, greener, and venomous, able to Poison things that threaten their dens. Poison doesn't go away, and it needs to be cured with Anti Venom. It can be protected against by wearing a Seashell Suit or a Horned Helmet.

“I should keep my distance.”

“Maybe I should just leave that one alone.”

“I think not smart to poke it.”

“A well deserved rest, no doubt.”

“It is cöwardly tö attack a sleeping enemy.”

“They're so cute when they sleep.”

“It is having a flashback to the spider war...”

“It dreaming of spider things.”

“I should probably leave them alone...”

“CONGRATULATIONS. YOU DID TERRIBLY”

“He gave his life for his queen.”

“It knew the risks.”

“It's just trying to get out of work.”

“Sorry, you started it!”

Spider Warrior about to leap.

A Set Piece featuring a sleeping Spider Warrior. More will spawn if it is attacked.

A dead venomous Spider Warrior in the Shipwrecked DLC. 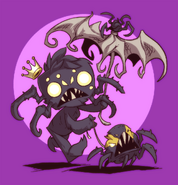 A Spider Warrior as seen in a drawing from Art Stream #42.

Spider Warriors as seen in the poster for the Long Live the Queen! update.