“AHHHHHHHH! That spider is huge!”

“Kill it with fire!”

“She is regal in her horribleness.”

“THE SPIDERS LIVE UNDER A SYSTEM OF MONARCHY”

“That must be the center of the hive-mind.”

“Maybe I'll just get out of her way.”

“Did she evolve from the spider den?”

“I will not bend the knee to the likes of you!”

“I don't suppose she's more afraid of me than I am of her.”

“Better stay out of her way.”

“Your majesty, please don't hurt me!”

“She a mighty Queen!”

“I've never heard of spiders having a queen, that's so interesting!”

“Just whose idea was it to make the spiders here so big?! I'd like to have a word.”

The Spider Queen is an aggressive Boss Monster added to the game in the Long Live the Queen update. She has 1250 health and attacks by biting and stabbing with her sharp claws, doing 80 damage with each attack.

She spawns from overgrown Tier 3 Spider Dens when the player or other mobs wander close by. After spawning, she will give birth to Spiders every 20 seconds, and if the queen has a combat target, a third of these will be Spider Warriors. A Queen can have a maximum of 16 spiders following her. These spiders are automatically aggressive towards the player, but will retreat back to the Queen if the player gains enough distance away from them.

When a Queen spawns, her Tier 3 Den is replaced with a Tier 1 Den, unless there are 4 or more Dens/Queens within 60 units. This Tier 1 Den grows into a Tier 2 Den in 60 seconds. The new den can eventually grow into a Tier 3 Den to spawn another Queen, thus making the Spiderhat a renewable item. The Queen will plant herself as a Tier 1 Den after wandering for 1.5 game days, if she finds is at least 20 units away from other Dens/Queens and there is 3 units of free space.

Webber will not be attacked by a Queen or her Spiders, unless he attacks first.

A Spider Queen is not nocturnal like other Spiders, and will fall asleep at night if not engaged in combat.

She takes three blasts from the Ice Staff to be frozen, and four Sleep Darts to be put to sleep.

Kiting is a process wherein a monster's attack is dodged, and then the monster is hit immediately after, but before the monster can attack again. The Queen attacks relatively quickly, but she is slow, so it is possible to attack her in the pauses between attacks. Always kill the recently birthed Spiders/Spider Warriors, though, before attempting to attack the Queen again. As always, good armor and weapons help a lot. If fighting without armor, having a couple of traps set around to kill the spawned spiders is a good idea. However, the Spider Queen can drain one's sanity (unless they are Webber or Walter) completely within thirty seconds (200 sanity), so it is advisable to keep the distance somewhat. Sanity-restoring items such as Taffy and Cooked Green Caps can be brought to counter the sanity drain.

Lure the Queen to a Pig Village, and let the Pigs attack her. Due to the kiting combat behavior of Pigs, the Queen and her spawned Spiders have trouble hitting them. As long as the Spiders she hatches are kept away from the Pigs, they should kill her quite quickly. This method also can prevent serious sanity drain.

If there happens to be a swamp nearby, lead the Queen to the swamp and over the Tentacles as they attack most mobs that pass by. Expect about 3-5 destroyed Tentacles in the process.

If one can find a herd of Beefalo in heat, and get the Queen close enough to them for at least one Beefalo to target it, the whole herd will eventually join in on the Queen. The Beefalo will not eat the meat dropped like pigs do. However, due to the fact that Beefalos don't use a kite method of attack like pigs, the Queen will stand her ground and be able to kill at least 3-4 Beefalos single-handedly. Wearing a Beefalo Hat will allow the player to retrieve the drops without being attacked in the process.

If the player has a Spiderhat, it is possible to gather spider allies from Spider Dens and order them to attack the Queen. This is very useful for when on low health. If playing as the character Webber (Reign of Giants DLC), all the player must do is simply tame spiders with meat instead.

Lure the Queen to a Killer Bee Hive, as Killer Bees have the same kiting technique as Pigs do. When a Killer Bee attacks the Queen, and she strikes back, all nearby bees will become aggressive to the Queen, including normal Bees. Bees can also be captured using a Bug Net and released near the Queen. Bee Mines are another option to ensure that the bees will attack her, though they are more costly to craft than the net.

At the full moon, position Woodie (if playing as that character) near the Spider Nest. After he has transformed into the Werebeaver, proceed to attack the nest. This is preferable to attacking as Woodie due to the Werebeaver's strength, health, and lack of sanity drain.

The Pan Flute can be used to put the Spider Queen and her Spiders to sleep. The queen will remain asleep if the player attacks the spiders around her. With the Pan Flute's 10 uses providing intermittent chances to clear all of the queen's spider spawns, it is far easier to engage the queen one on one.

The Spider Queen can be easily killed by freezing her with an Ice Staff, placing 5 Gunpowder near her, lighting it on fire, and then finishing her off with a spear. However, if she is killed with 6 Gunpowder or more, all she will drop is Ashes and Cooked Monster Meat, since she took fire damage after the explosion, and thus, died by fire.

Below is the number of hits it takes with each weapon to kill a Spider Queen when playing with characters with a default damage modifier. The Weather Pain is not included due to the random nature of its projectile.

It takes 3 blasts to freeze a Spider Queen with an Ice Staff. It takes 4 Sleep Darts to put Spider Queen to sleep.

Spider Queen spawning from Tier 3 Dens can be accelerated by haunting the den. There is 10% chance of a haunt causing Tier 3 Den to become Spider Queen.

Spider Queen about to spawn a Spider.

A Queen preparing to attack. 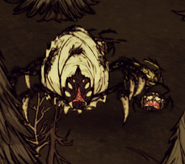 Spider Queen with her entourage. Warriors indicate they had fought something.

The Spider Queen goes to sleep at night, while her spawn stay awake. She will ignore mobs until she is attacked. 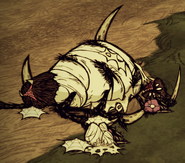 Spiders left outside after the queen they accompanied settled down. 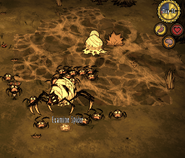 The Spider Queen can amass quite a following.

Spider Queen after spawning too close to the ocean.

Spider Queen and Spiders in the update poster for Long Live the Queen.

A Spider Queen found on a Don't Starve Together loading screen. 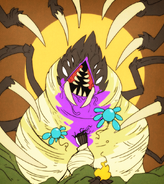 A Spider Queen as seen in a drawing from Art Stream # 8.