“It has a tangy, antiseptic smell.”

“Eeeeew it's slimy and stinky!”

“Even in death, this beast causes pain.”

“I HARVESTED ITS ORGANS”

“Why does health food taste so bad?”

A Spider Gland is a healing item dropped by Spiders when killed or a Spilagmite when mined. It restores 8 Health when used by the players or when used on Mobs (including hostile enemies). Spider Glands can be used to craft Healing Salve.

Spider Glands are flammable and turn to Ashes when burnt by Fire.

In Reign of Giants, Webber can use 6 Spider Glands, along with 12 Silk and 6 Papyrus, to make Spider Eggs. 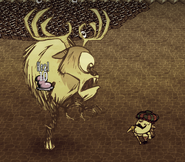 Wolfgang using a Spider Gland to repair a damaged section of wall in an older version of the game.
Add a photo to this gallery
Retrieved from "https://dontstarve.fandom.com/wiki/Spider_Gland?oldid=443836"
Community content is available under CC-BY-SA unless otherwise noted.