“The bugs are hiding in there.”

“A nest of filth and villainy.”

“Fascinating. These spiders have a communal hive.”

“Holy Mackinaw! Look at that thing!”

“It appears to be growing. Almost as if it were alive.”

“Crush them at the söurce!”

“Looks cozy in there.”

“A spider has to live somewhere, I suppose.”

“So rich they lined their walls with silk.”

“I'd rather not mess with that.”

“A leggy surprise awaits inside!”

“Hey, that must be where the spiders live! It's huge!”

“I'm not in any hurry to tangle with spiders.”

A Spider Den is a nest in which Spiders and Spider Warriors spawn and live. Spiders emerge in search of food at Dusk and return to their Dens at dawn. The number of Spiders that live in a Den varies depending on its size (see table below). When a Den reaches its final stage, it evolves into a Spider Queen. Spider Dens are surrounded by a creep-like substance called Sticky Webbing, which slows down anything caught in it, aside from Spiders. Sticky Webbing will grow on any surface except a small area around a Rabbit Hole.

When attacked, Spiders and Spider Warriors currently inside will emerge and attack. If anything steps on the Sticky Webbing that surrounds the Den, a few Spiders might come out and investigate. If they do not encounter anything before reaching the end of the web, the Spiders will return to the Den.

It takes 90 seconds for a Den to respawn a single spider. When a Den reaches the next stage, all Spiders are renewed.

A Spider Den has 3 growth stages: 5–10 days in Tier 1, 5–10 days in Tier 2, and 12.5–25 days in Tier 3. Tier 3 Dens will evolve into a Spider Queen after they hit the next stage and the player has been nearby for 60 to 120 seconds. When a Spider Queen spawns, she leaves behind a Tier 1 Den nearby if there are less than 3 other Dens or Spider Queens in 60 radius (15 Terrain Tiles). This new Tier 1 Den will grow into a Tier 2 Den in sixty seconds real time. After wandering to a new location, the Queen will settle down, transforming back into a Tier 1 Den.

The amount, as well as the type, of Spiders spawned from a Den varies depending on the Den's Tier. Spider Warriors only spawn at Tier 2 and above. The amount of Silk dropped by destroying a Den also increases with its Tier. Tier 3 Dens will also drop Spider Eggs when destroyed, allowing new dens to be planted by the player anywhere in the world.

A simple method to destroy any Spider Den without taking damage is to utilize Traps. After placing a few traps in a line, stand on the Webbing to attract a few Spiders. Lead them into the Traps and empty them once they are caught. Repeat until the Den is empty. The Den can now be safely destroyed. Beware that a Den can still grow to a higher tier while it's being attacked, instantly restoring all Spiders, including Spider Warriors.

If getting resources is not important, a Den can be set on fire directly with a Fire Dart, Fire Staff, or indirectly by creating nearby fires. The Den will burn to Ashes, but all Spiders inside the Den will come out as soon as the fire is started. These Spiders and any others that were not inside at the time will become homeless and wander about until they are dealt with. For a cleaner job, place some Slurtle Slime or Gunpowder near the Den and light it. The resulting explosion will leave behind a few Monster Meats and some Ashes.

For the item that could be obtained by digging up Sticky Webbing, see Removed Features.

Sticky Webbing is a Turf that cannot be dug up. It's a creep-like substance which "flows" out of Spider Dens or Spilagmites and slows the walking speed of all creatures (except Buzzards, Spiders and Webber). If the Spider Den or Spilagmite is destroyed, the webbing will quickly disappear.

Sticky Webbing can also be found in Sacred and Labyrinth biomes in the Ruins. The webbing found there has no associated Spider Den or Spilagmites, as it houses Dangling Depth Dwellers, which reside on the ceiling above. Although the nest cannot be attacked like the Spider Den or Spilagmite, it can be destroyed by burning an item in the middle of the webbing. This will remove the sticky webbing soon after.

Webber is not slowed down by stepping on Sticky Webbing, neither does he trigger Spiders to emerge. He is also able to upgrade Spider Dens by using Silk on them. It takes 5 Silk to upgrade a Tier 1 and Tier 2 Spider Den. Webber cannot upgrade a Tier 3 Den. One must wait for the Den to evolve into a Spider Queen naturally.

A Buzzard that has landed and is moving around does not trigger Sticky Webbing, it is not slowed down while on it either.

In Don't Starve Together, Ghost Characters can haunt a tier 3 Spider Den for a 10% chance to spawn a Spider Queen.

Webber can decorate dens with a Den Decoration Set. Decorated dens don't grow, have smaller sticky webbing and the spiders they spawn are neutral to everyone. Hitting a spider within a certain radius of a decorated den will remove the decorations.

Webber can also shave dens down for one silk per tier. He can also sleep inside tier 3 dens like a Tent with infinite uses, however the benefits are not as superior compared to other Sleeping apparatuses. 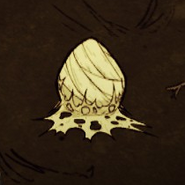 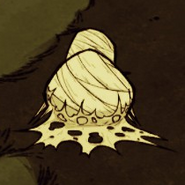 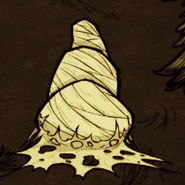 Webbing around a few Spider Dens.

A Set Piece featuring a circle of Tier 3 Spider Dens.

Wilson is far enough away for the resident Spiders not to notice him. 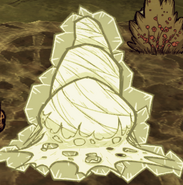 A Spider Den frozen by Deerclops in the Reign of Giants DLC. 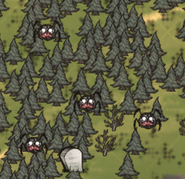 Spider Den icons on a Map.

A Spider Den without webbing in the early alpha of Don't Starve.

A Spider Den planted in the ocean by a bugged Spider Queen in the Shipwrecked DLC.

Spider Den as seen on the 2018 Valentine Cards.

In official game screenshots from early builds of the game
Community content is available under CC-BY-SA unless otherwise noted.
Advertisement