“They come from above.”

“Scary spider from above.”

“The darkness has drained the color from their fur.”

“Ah, this species of arachnid has adapted to life on the cave ceiling.”

“They're smart to live away from the corruption.”

“Creatures in this world evolve at a terrifying rate.”

“Fascinating. They make gravity work for them.”

“Our friends live up there.”

“Ah, the old "drop from the ceiling and commit violent acts" act.”

“IT FALLETH FROM UP YONDER”

“It's rude to just drop in on someone like that.”

“See you hiding up there, flort!”

The Dangling Depth Dweller is a Spider variant found in the Ruins. They drop from the ceiling when the player steps on their web.

On the ground, they can leap at enemies in the same way as Spider Warriors. Their webs are commonly found in the Military and Labyrinth Biomes, along with Ornate Chests. Their nests are stuck on the ceiling and unreachable, although they can be destroyed by igniting anything flammable in the center of the web.

Dangling Depth Dwellers have the same drops as all other Spiders: Monster Meat, Spider Glands, or Silk.

Below is the number of hits it takes with each weapon to kill Dangling Depth Dwellers when playing with characters with a default damage modifier. The Weather Pain is not included due to the random nature of its projectile.

When playing as Webber in the Reign of Giants DLC, Dangling Depth Dwellers are neutral and can be befriended with Meats.

In Don't Starve Together, Dangling Depth Dwellers will retreat to their dens during the day. Their webs are permanent and cannot be destroyed by lighting nearby items on fire. Dangling Depth Dweller dens will convert nearby blue mushtrees to webbed Mushtrees. Chopping a webbed mushtree will cause spiders to spawn from all nearby dens.

Dangling Depth Dwellers on the ground. 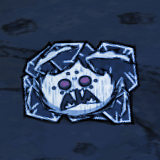 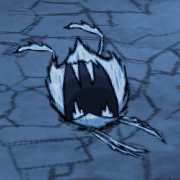 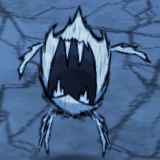 Depth Dwellers dropping down after the player walked on their web.

A camp in a Set Piece made dangerous by Depth Dweller nests.

A Dangling Depth Dweller plush made by Klei Entertainment.

A Webbed Blue Mushtree, which spawns Dangling Depth Dwellers when chopped down.
Retrieved from "https://dontstarve.fandom.com/wiki/Spider/Dangling_Depth_Dweller?oldid=449237"
Community content is available under CC-BY-SA unless otherwise noted.