Can hide in their shell which absorbs 75% damage

“What a frustrating jerk!”

“An arachnid with a thick carapace.”

“Does its eye allow it to see in the infrared? I wonder...”

“A spider that turtles!”

Cave Spiders are a Cave-dwelling type of Spider which have a shell-like carapace which they can close to hide and protect themselves from damage. They spawn from Spilagmites along with Spitters. They have one large red eye and a gaping maw with the shell making up their 'head'. Like the Spitter, Cave Spiders will emit low pitched roars, as opposed to the other spiders' high pitched gurgling growls.

In the Reign of Giants DLC, Cave Spiders are neutral to and can be befriended with Meats by Webber.

Cave Spiders differ from other Spiders because of their shell-armor. After two hits, they will close up the shell which absorbs 75% of damage. After a few seconds, they will open their shell and begin to attack again, at which point they are vulnerable. These Spiders can be stunlocked while they are out of the shell and will stay inside as long as they are being attacked, which means they are relatively easy to kill with patience.

Cave Spiders will follow the character when wearing the Spiderhat. However, caution must be taken as the combination of the Spiderhat and multiple spider followers can drastically decrease Sanity, which can be difficult to manage since it is always considered Night underground. Also, it is important to watch the Spiderhat's durability level as the Cave Spiders and Spitters will become hostile when it runs out.

Below is the number of hits it takes with each weapon to kill Cave Spiders when playing with characters with a default damage modifier. The Weather Pain is not included due to the random nature of its projectile.

Cave Spider in its shell. 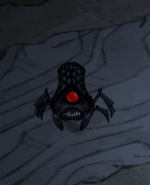 The spider's eye will glow a bit when in the dark.

Wilson about to be attacked by a Cave Spider. 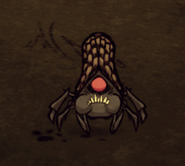 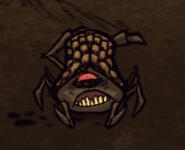 A dead Cave Spider.
Retrieved from "https://dontstarve.fandom.com/wiki/Spider/Cave_Spider?oldid=449236"
Community content is available under CC-BY-SA unless otherwise noted.