"Use the pointy end."

“They who wield it shall become the destroyer of worlds.”

“It lacks the heft of a good solid axe.”

“Not incredibly effective weapon, but it has other uses.”

“We should stick things with the pointy part.”

“I could jabber on wit' this all day.”

“Looks sharp. Sharp could come in handy around here.”

“For defense only, I promise.”

The Spear is a Melee Weapon crafted from the Fight Tab. It requires 1 Flint, 1 Rope, and 2 Twigs to craft and a Science Machine to prototype. It can also be found near the walled area where the Box Thing lies.

The Spear deals 34 damage per hit, making it the second weakest melee weapon in the game. Its Durability allows for 150 hits, meaning each hit will reduce it by 0.66%.

A rudimentary weapon, sharp and ready for a quarrel.
See ingame

Elegant
Rose Pike
No sharper than any other spear, though much lovelier.
See ingame 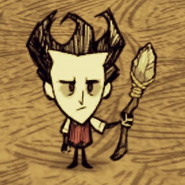 Wilson figurine with a Spear.