“Do they have little fires in their bellies?”

“IT VIOLATED MY SMELLING MODULE.”

“A classic example of symbiosis.”

“I think it's living hair.”

“Simple creatures. They exist only to sleep and feed.”

“It is not polite to slurp.”

“WHAT LIGHT THROUGH YONDER FUR BREAKS?”

“I'll make you a deal: you keep your slobber, I'll keep my brain.”

“Please keep that mouth to yourself!”

The Slurper is a creature found only in the Ruins, in Wilds, Village and rarely in the Mushtree Forest biome. It attacks by rolling to and biting the target and then jumping up and engulfing the player's head with its mouth.

A Slurper equips itself as an item in the head slot, draining Hunger at a rate of 1.7 per second or 5 every 3 seconds (about ten times faster than normal hunger drain). Previously equipped headgear will be dropped to ground when the Slurper attaches itself, regardless of whether or not the player has free inventory slots. It makes a constant "slurping" noise as long as it's attached, hence its name, and converts the hunger it feeds off the victim into positive hunger for itself. While attached on a head, the Slurper gives off about the same radius of light as a Miner Hat. A Slurper that is not attached to a character will give off about as much light as a dropped Light Bulb. The source of the light is its eyes, which are made of Light Bulbs.

A Slurper may also attach itself to the head of a Bunnyman or Pig. Since neither Bunnymen nor Pigs have "hunger" implemented in the same way as the player, a Slurper attached to one of these creatures will drain approximately 5 health per 2 seconds instead (which will fill up the Slurper's own hunger meter as per usual). A Bunnyman who loses too much health from a Slurper will flee until it regains health, the Slurper detaches itself, or the Bunnyman dies. Despite the fact that Splumonkeys may also wear hats, Slurpers do not target them.

Slurpers can easily be removed by attempting to unequip them from the head slot with the mouse. They always drop two Light Bulbs when killed and sometimes also a Slurper Pelt.

A Slurper will initially sleep once spawned, but once it becomes hungry, it will wake up and wander, rolling around. At 50% hunger level, it will begin to signal that it is becoming hungrier by raising its "head" and puffing itself up while rumbling. As it begins to starve, it will actively hunt down the player, attempting to latch onto the player's head. If successful, it will begin to drain hunger from the player until it has reached 90% of its hunger capacity. Then, it will drop off of the player's head and sleep. The player can force the Slurper to attach itself to their head by attacking it while it's asleep. A Slurper with an empty stomach can stay attached for 140 seconds before it detaches itself to sleep.

Although a Slurper may attach itself to a Bunnyman or Pig, it will always try to attach itself to the player first, and it will only go for other targets if the player cannot be targeted (e.g. if the player is out of its attack range). Slurpers will attack followers even if they are not able to latch onto them. They will attack any monster (Spiders, Tentacles, Clockworks, etc.) located around a half screen away, but they will not attempt to latch onto them.

It is possible for a Slurper to attempt to attach itself even if one is already feeding on a target's head. This will "drop" the already-attached Slurper and replace it with the new Slurper.

Slurpers at 0% hunger will not take constant damage like players do, nor will it change its behaviour in any way. It will continue to hunt down potential targets.

In Don't Starve Together, Slurpers will respawn when the Ruins regenerate, which will occur after killing the Ancient Fuelweaver, causing the Ancient Gateway to destabilize and cause an explosion that will trigger after 3 minutes. This makes Slurper Pelts renewable as the newly spawned Slurpers can be killed again.

As of a hot fix during the Forgotten Knowledge Beta, Slurpers are now considered monsters and are naturally targeted by Bunnymen and Pigmen. They're also targeted by Depth Worms now. During the nightmare phase of the ruins, Shadow Splumonkeys also attack any Slurper in sight. This is not the case in the base game, however.

Front, back, and side view of a Slurper. 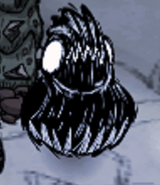 A Slurper attached to a Bunnyman.

A Slurper attached to a Pig. 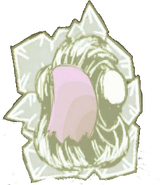 Sleeping Slurpers do not emit light.

Slurper sticking its tongue out when finding something to latch onto. 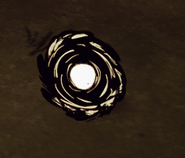 Slurpers move around by rolling. 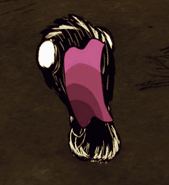 Slurper burping after detaching from a victim. 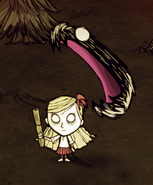 Werebeaver missing limbs while a Slurper is attached.

Slurper featured in the Hungry for Your Hunger update poster.

Slurper with its tongue waggling in the Hungry for Your Hunger update trailer. 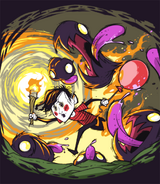 Slurpers as seen in a drawing from Art Stream # 99.
1/22
Retrieved from "https://dontstarve.fandom.com/wiki/Slurper?oldid=486646"
Community content is available under CC-BY-SA unless otherwise noted.