"A chunk of wet, muddy grass."

“I found this underground.”

“Has a high viscosity.”

“I have a sinking feeling about this.”

Slimy Turf is one of the Turf items, acquired by digging Slimy tiles with a Pitchfork. Like other Turfs, it can be placed on any bare ground tile, or it can be used as fuel.

Slimy Turf is only found in Caves. It is one of the two Turfs that connect or surround a Sunken Forest. Sometimes, a player may find Saplings in an area covered with Slimy Turf.

Berry Bushes, Grass Tufts, Saplings, Spiky Bushes, Pine Cones, Birchnuts, and Lureplants can be placed normally on Slimy Turf, and Eyeplants will spawn normally. Crows are the only Birds that will land on Slimy Turf.

Slimy Turf has the third highest overlap priority of any turf in the game, meaning it will almost always appear "on top" when overlapping adjacent turfs. The only turfs with a higher overlap priority is Cave Rock Turf and Mud Turf.

If brought to SW, Floods can spawn on this turf.

In Don't Starve Together, Slimy Turf can be crafted with 1 Cut Grass and 1 Foliage in the Landscaping Tab. As with all Landscaping Tab items, it cannot be prototyped and Characters must stand near a Terra Firma Tamper to craft it. 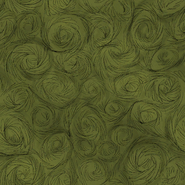 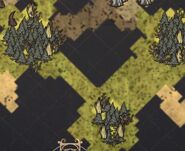 Slimy Turf is shown in a shade of green in the Map.
Español
Community content is available under CC-BY-SA unless otherwise noted.
Advertisement