Don't Starve Wiki
Register
Don't have an account?
Sign In
Advertisement
in: Mobs, Return of Them, Neutral Creatures
English

“I have an inkling they'll come in handy.”

“No substitute for a good torch.”

“FLESHSACK WITH AN INDICATOR LIGHT”

“I hope they stay close. But not too close.”

“An eerie eye to see the sea.”

“I wonder if that's their full size, or if these are just babies...”

“Could you light the way without being a nuisance, please?!”

The Skittersquid is a neutral Monster exclusive to Don't Starve Together, introduced in Return of Them.

Skittersquids have a chance to appear close to Ocean Fishes. The number and spawn rates depend on the Moon Cycle. They spawn the most during the New Moon. When killed, Skittersquids will drop one Monster Meat and have a 33% chance to drop a Light Bulb. 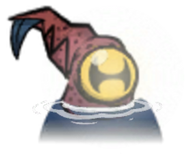 A Skittersquid in the Ocean.

The screen after being hit by a glob of ink.

Skittersquids in the Hook, Line, and Inker trailer.

A Skittersquid featured in a promotional image for the Don't Starve Together QOL update. 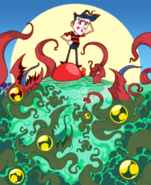 Skittersquids as seen in a drawing from Art Stream # 97.
Tiếng Việt
Community content is available under CC-BY-SA unless otherwise noted.
Advertisement