“I wonder if I could move that rock.”

“Who plugged that hole?”

“Who wants to go in scary cave hole, anyway!”

“Someone is trying to keep the underground at bay.”

“DESCENT BLOCKED. HOW TO PROCEED?”

“The placement of that rock looks intentional.”

“I plugged it a long time ago.”

“What treasures lie beneath?”

“How much effort will it take to get down there?”

“I wonder what's underneath that?”

“I ain't one fer climbin' in holes like a swab.”

“A doorway into the depths below.”

“That rock's blocking the entrance!”

“I never was good at leaving well enough alone.”

A Sinkhole is the entrance to a Cave or Ruins and can be found randomly in the world and in the first level of a Cave.

Each Sinkhole leads to a new Cave or Ruin. When first discovered, the Sinkhole will be a Plugged Sinkhole and is covered with a jagged rubble mound; the player can usually tell they are close to a Plugged Sinkhole on the surface when they find Rocks lying about in the Biomes for no reason. Mining the Plug reveals the hole with a rope going down into its depths while providing Flint and Rocks on the surface and Thulecite, as well as Thulecite Fragments underground. It takes six hits from a Pickaxe to unplug it. Once unplugged, up to 6 Batilisks will spawn quickly from the Sinkhole at dusk and return underground in the morning. If Batilisks are killed, they will respawn at a rate of 1 per minute until the maximum of 6 has been reached.

There are only three Sinkholes in a surface world and one for each Cave. Plugged and open Sinkholes are marked on a map by a gray mound and a hole with a red arrow pointing downwards, respectively.

On default settings, the three surface Sinkholes are guaranteed to spawn in the following locations:

The number of sinkholes in the world settings can only be "Default" and "None".

In the Hamlet DLC, Sinkhole can be found in Pinacle Biome, which can only be accessible via BFB. Sinkhole in this DLC doesn't lead to a new Cave. Instead, it leads to a cave system similar to the Ancient Pig Ruins and Mant Hill, consisting of a series of connected rooms. In one of the rooms there will be a Stone Plug in the middle of the back wall. Mining this rock will trigger a single Earthquake, which will create a passage out of the caves. This passage will lead to one Cave Cleft on any of the other 4 islands, regardless of whether or not it had been explored.

In Don't Starve Together, caves are only one extra world, so all sinkholes lead into the same cave. As the Ruins are on the same level with caves, there are no sinkholes in caves leading further below.

In default settings, the world will have 10 sinkholes, and caves will have the same number of corresponding staircases, scattered around in the "caves" part of underground. Notably, the relative location of either of them has no influence on the locations of their counterparts, so for example, a pair of nearby sinkholes can lead to staircases which are far apart from each other (or vice versa).

The original texture of the Plugged Sinkhole.

The right icon shows a Plugged Sinkhole, and a Cave entrance is on the left.

The light that shines on the sinkhole when the player exits the caves.

A Ruins Sinkhole in a cave. It is a Plugged Sinkhole retextured so it is made of Thulecite.

Wilson looking down a Sinkhole in promotional artwork. 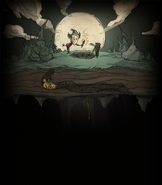 A hidden image of Wilson looking down a sinkhole.

An unplugged Sinkhole in Don't Starve Together. It has a staircase leading down instead of a rope.

A Caves map in Don't Starve Together with all staircases revealed.

A pair of nearby staircases in a cave in Don't Starve Together.
Polski Tiếng Việt
Community content is available under CC-BY-SA unless otherwise noted.
Advertisement