“Woah, how did they get like that? I need to get a closer look!”

“I don't think that spider was assembled properly.”

Shattered Spiders are hostile mobs exclusive to Don't Starve Together, introduced in Return of Them. They are found exclusively on the Lunar Island spawning from Shattered Spider Holes.

Just like regular spiders, these can be caught in traps, becoming an inventory item which can be "murdered" for the normal drops.

If their attack hits a normal Spider or Spider Warrior, they aggro to each other. 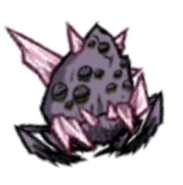 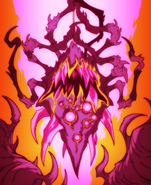 A Shattered Spider as seen in a drawing from Art Stream # 83.