Is protected by the Tiger Shark.

“I could see myself growing old with a houseful of these.”

“THIS KITTEN HAS A HELICOPTER PARENT NEARBY”

“The offspring seem quite harmless. And cute.”

“What a wonderfully adorable abomination!”

“You're pretty cute for my worst nightmare.”

The Sharkitten is a passive Mob found in the Shipwrecked DLC. It spawns from the Sharkitten Den during Monsoon Season. If the Sharkitten Den is approached by the player, the Tiger Shark will return to its location to defend its Sharkittens. A Sharkitten drops 2-3 Raw Fish, one Shark Fin and 0-2 Shark Gills when killed. Killing one will increase the player's naughtiness by 4%.

Below is the number of hits it takes with each weapon to kill a Sharkitten when playing with characters with a default damage modifier. The Weather Pain is not included due to the random nature of its projectile. 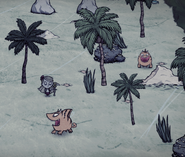 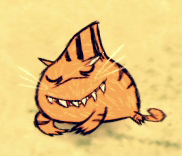