When the player is insane, up to three of these creatures will spawn around the player and attack. Upon being killed, they will drop Nightmare Fuel, used for crafting several Magic items.

The sanity meter will drop by being near aggressive Shadow Creatures because of their insanity aura, but it will rise by at least 15 points after killing one.

Shadow Creatures also appear in Ruins, spawning from Nightmare Lights and Nightmare Fissures during all the phases (except Calm State) of the Nightmare Cycle. They'll be tangible and hostile to the player regardless of sanity and will pursue the player until the cycle is at the calm stage again. When a Shadow Creature is spawned from a Nightmare Light, killing it will not increase your sanity.

Originally believed to be the name of all the Shadow Creatures, the Crawling Horror is now known to be just one type.

It is a large tick-like creature, with many legs, and is the most common of the Shadow Creatures.

While not aggressive (above 15% Sanity), Crawling Horrors will wander around, move away from the player when the player gets too close, and occasionally teleport around the player's vicinity. They can disturb the webbing around Spider Dens, causing inhabiting Spiders to emerge and investigate the cause. They also can prevent items and the ground underneath them from being clicked on, even when they're not entirely solid.

Crawling Horrors turn aggressive when the player's sanity is 15% or below (18 for Willow, 15 to 45 for WX-78, 37.5 for Wickerbottom, 22.5 for Wes and 30 for all other characters). Walking near these will decrease Sanity, and they will restore 15 Sanity and drop Nightmare Fuel when killed.

A version of the Crawling Horror called Crawling Nightmares can be encountered in the Ruins. This version is able to attack even when the player is sane, but they will only spawn from Nightmare Lights and Fissures. When killed, they will not restore sanity.

The Terrorbeak is a creature with an enormous beak and slim body, with several small legs. Like the Crawling Horror, it will attack the player, but is less common. Players can attack them most easily by trapping them on the coast or by hitting them with a Boomerang.

Killing a Terrorbeak with characters with normal sanity (200) while being attacked by Shadow Creatures is a good way of stopping the attacks, as they give 30 Sanity when killed, causing Shadow Creatures to go neutral again, even at 0 sanity.

A version of the Terrorbeak called Nightmarebeaks can be encountered in the Ruins and sometimes in Caves.  This version is able to attack even when the player is sane, but they will only spawn from Nightmare Lights and Fissures. When killed, it will not restore sanity.

Below is the number of hits it takes with each weapon to kill Shadow Creatures when playing with characters with a default damage modifier.  The Weather Pain is not included due to the random nature of its projectile.

Mr. Skits is a small, serpent-like creature that will watch the player from afar. He also appears above Obelisks when they are raised or lowered, flying into them. If the player attempts to reach Mr. Skits, he will turn and slither away, disappearing from the screen. He may then reappear elsewhere.

Mr. Skits may also flicker on the screen for a fraction of a second, then disappear.

Mr. Skits will only appear if the sanity level of the player is below 82.5%. He cannot attack, nor can he be attacked. His only purpose is to remind players of their sanity level and provide a scare.

The Shadow Watcher is a long, thin Shadow Creature which appears around light sources at night (which includes a charged Lightning Rod) from many angles, so it might be upside down. The Shadow Watcher will appear when the player's sanity drops below 65%. It is harmless, and it cannot be attacked. It will usually disappear when player stands on its eyes. When it appears on snow or occasionally on a light background, it will appear as just an outline. This Shadow Creature disappears after dawn breaks.

Besides just frightening the player at night, the purpose of a Shadow Watcher is unknown. However, there is a Shadow Watcher in the source code of the fourth and the sixth William Carter puzzle and one in the fourth puzzle's scene, possibly a hint to a connection between the two entities.

Night Hands are Shadow Creatures that extend from the darkness at night. While not directly attacking the player, Night Hands will attempt to put out fires. Up to 3 Night Hands can spawn at the same time. Their appearance is also marked by a music box playing, which layers as more Hands appear on-screen.

When stepped on, Night Hands will shrink away from the player (with a small insanity aura at -40/min). Once far enough into the darkness, a Night Hand will disappear and the music box will stop playing, though usually the player has to briefly be in total darkness to chase it away. If the player stokes their fire after the Night Hand appears, it is possible to see the "end" of the night hand. Forcing the Night Hand to shrink away until its wrist is touching its "end" will kill the Night Hand.

If not taken care of, a Night Hand (or more) can easily take out a small fire, reducing 50% of the fire's strength each. Night Hands do have the potential to actually put out a fire if this occurs; however, it is somewhat rare, and the more hands that appear, the less they can damage a fire (1 Hand = <60% per hand. 3 Hands = <30% per hand).

If the fire is at its highest strength, then it is unlikely that even three hands can completely snuff it out, so a potential tactic is to max the fire and stand near to max it out again after the attack, although this burns quite a few resources and does not get rid of the Night Hands. A second fire nearby "cancels" Night Hands altogether for the night. A Miner Hat does the same, as does placing Fireflies around the base.

Occasionally, even when sanity is over half full, this particular Shadow Creature can still appear.

When the player's sanity is below 80%, several Eyes will pop out of the darkness. They are purely for atmosphere and have no effect. They disappear when the player goes to them or the area they are in is lit.
The lower the player's sanity, the more eyes spawn with increased intensity. They will go from round, small, and sometimes curved eyes to larger, sharp, menacing ones. Sometimes trees or other obstacles can block eyes, commonly forming a one-eyed Shadow Creature.

In Epilogue: Checkmate of Adventure Mode, eyes will be visible in the darkness regardless of the player's sanity. 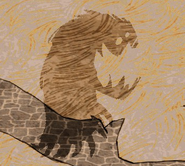 A Night Hand can be on water, making it difficult for people who have a Campfire or Fire Pit on a coast.

Eyes may appear in a lit area. 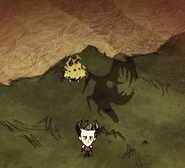 A Shadow Watcher while the player has high sanity.

A Shadow Watcher seen while the player is wearing the Moggles.

Shadow Creatures spawning from a Nightmare Light in the Ruins during the Nightmare Phase.

A Crawling Horror and Terrorbeak menacing Wilson in the Insanity! promo art.
Add a photo to this gallery