“I should dig there.”

“Sigh. I suppose I should dig it up.”

“What delightful surprises are in there?”

“If you're going to hide a treasure, don't put a fancy feather on it.”

The Secret Bandit Camp is an object exclusive to Don't Starve: Hamlet DLC, which spawns after reading the Bandit Stash Map, obtainable by killing a Masked Pig.

After reading the Bandit Stash Map, the player's world map will open and reveal a red mark quite similar to those from Shipwrecked, somewhere near the player (in a specific range).

The camp can be dug with a Shovel to spawn a Chest and two Peagawk Plumes. If the player opens the chest, they will find rare/valuable items, such as long conservation food, Gold, Armor, and Oincs. As there is no randomness to it, the chest will always contain one of these 6 item combinations: 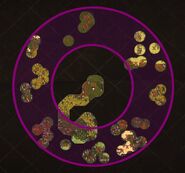 The purple zone represents the area around the player where a Bandit Camp can spawn. 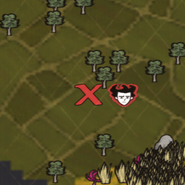 The X Mark as it can be seen on the World Map.
Retrieved from "https://dontstarve.fandom.com/wiki/Secret_Bandit_Camp?oldid=446038"
Community content is available under CC-BY-SA unless otherwise noted.