Start a Wiki
“Life in the frozen wastes.”

Winter is one of two seasons affecting the surface present in Don't Starve (the other being Summer). It is also one of the four seasons in Reign of Giants DLC, the others being Summer, Spring, and Autumn. By default, Sandbox Mode Winter lasts for 16 days; the first winter will start on day 21 and ends on day 36. This will change if the player edits the length of the seasons in the Preferences. Stages in Adventure Mode may have different seasonal variations. Many things in the world change in Winter and surviving can become much more difficult. 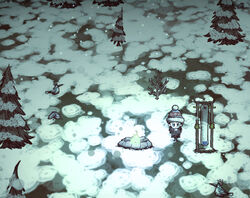 The biggest change in Winter is the drop in temperature which results in freezing if the character gets too cold. Freezing quickly drops the player's health. To prevent freezing, characters must maintain their body temperature by regularly going back to a source of heat. The best way to do that is to carry around a heated Thermal Stone, and one should always have the means to make Fire in an emergency during winter. Additionally, wearing warm clothing increases the time a character can be away from fire before getting too cold. Wilson's and Webber's Beards also helps them keep warm similar to warm clothing, and their efficiency increases as it gets longer.

Building a Thermal Measurer helps the player know when the change in seasons is coming ahead of time, and tells how cold it is getting. Dusk and Night are colder than Day, and they last longer in Winter. Freezing is often a recurring death for new players as they don't prepare well enough to stop the freezing in an emergency. A good strategy to keep temperature up is to put on warm clothes on the last day of Summer (or Autumn in the Reign of Giants DLC) so heat will start off higher in winter.

Snow is basically winter rain; it will make the turf snowy thus making it hard to see roads and paths. It will also add a layer of snow to objects such as Trees or Science Machines. Setting rain to lots (infinite) on world presets will make infinite snow during winter. Snow causes the characters body temperature to slightly decrease. Snow does not damage WX-78 the same way rain does. Snow will all melt away when it turns to Summer, or if it rains during the Winter.

In the Reign of Giants DLC, Mini Glaciers will form during Winter, and freezing is a possibility in Caves and Ruins. In addition to this, Night and Dusk are even longer during Winter in the DLC, taking a bigger hit on sanity for those who are unprepared. The DLC adds some new insulating items, like the Hibearnation Vest, to help fend off the cold.

Birchnut Trees are also not aggressive during Winter, and they have no leaves or Birchnuts left on them.

Winter in Reign of Giants leads to Spring.

In Don't Starve Together, the Loot Stash will spawn in the Deciduous Forest or Mosaic biome. An attempt to unlock it with a Deer Antler will spawn Klaus.

Start a Discussion Discussions about Seasons/Winter