"A salty addition for a hearty meal."

Increases the Health value of Crock Pot dishes by 25%.

“A little sodium's good for the heart.”

“For rubbing into wounds.”

“My doctor said I shouldn't have too much.”

“It has the briny taste öf the sea.”

“I could really go for some potato chips.”

“Careful with that stuff!”

“I'll just toss a pinch over my shoulder for good luck.”

Seasoning Salt is an Item exclusive to Don't Starve Together, introduced in Return of Them. They can only be crafted by Warly in the Seasonings Tab using three Salt Crystal rocks at the Portable Grinding Mill.

Seasoning Salt can be added to Crock Pot dishes in a Portable Seasoning Station for a 25% boost to their healing effects. Dishes seasoned with Seasoning Salt gain the adjective Salty before their names. 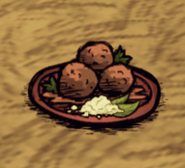 Dishes seasoned with Seasoning Salt appear with a plate on the ground.
Community content is available under CC-BY-SA unless otherwise noted.
Advertisement