“I thought it was strangely windy around here.”

“Stay away from my precious flames!”

“A vortex of unyielding energy!”

“I would rather not get sucked into that.”

“A fascinating destructive force. I should take a closer look.”

“This thing needs to relax!”

“Swell. Now the wind is alive.”

Sealnado, also known as the Twister, is a Boss Monster introduced in the Shipwrecked DLC. It spawns during the Hurricane Season. Before its arrival, wind noises will be heard and the characters will quote about an incoming Giant. It can be put to sleep with a Pan Flute,and is immune to fire. Sealnado receives 34 additional damage when attacked with a Cutlass Supreme. Defeating the boss in the Tornado form will drop Turbine Blades and reveal its true form.

×1 (either killed or spared)

“I've been burned by cute things before.”

“It has no awareness of the ills of this world.”

“YOU HAVE TO BE LAUNCHING A JOKE EXECUTABLE ON ME”

“Now how did you cause all that trouble?”

“What an adorably destructive creature! I want to take it home with me.”

“Yöu were the little guy döing all that huffing and puffing?!?”

“Its cheeks look so pinchable!”

“I just wanna squish its face into my face.”

“I bet it's delicious, but I just don't have the heart to find out.”

“It's always the cutest things that cause the most destruction.”

The Seal is a passive mob and poses no threat to the player. Killing the seal form will drop 4 Meats and a Magic Seal, and adds 50 points of naughtiness which immediately spawns Krampus.

If the player refuses to kill the Sealnado in its seal form, it will disappear once the player leaves the approximate vicinity of the seal. When it disappears, it will leave behind a Magic Seal. This choice allows obtaining the Magic Seal without having to face Krampus; however, the Meat reward will be unobtainable.

The Sealnado generally has two patterns: punch and twister. Initially, the Sealnado twister AoE attack can be done as one of the first couple attacks during encounter. Sealnado will throw about 3-6 Sealnado punches between each twister attack.

Sealnado will absorb nearby items continuously. However, it will drop a few when attacked.

Sealnado will create a large twister AoE attack around its area. On land, the twister sucks up the player, causes 250 damage, drains 33 sanity, and absorbs a couple of the player's items. On the Ocean, Sealnado's twister will instead draw in Common Waves inward, and then releases Big Waves outward.

Sealnado will try to go off-screen to despawn once Monsoon season arrives.

The basic strategy is to hit the Sealnado 2-3 times and dodge. When the Sealnado performs its twister attack, the player has less than 5 seconds to get away. A safe distance includes the Sealnado off of the screen plus slightly more. Wearing windproof items like Windbreaker allows players to be somewhat closer to Sealnado without being sucked in.

After 2-3 player attacks, the Sealnado will motion one of its arm to land a punch. The player can tell the twister casting is finished when a thunder sound is heard from the distance or by viewing the outer edge of the screen, where the whirl twister will start disappearing.

Walls can be used to protect against the twister by hiding behind them. These walls will still work even if they are flattened.

Ranged weapons such as the Harpoon and Boomerang can be used, but they will end up being absorbed. For fighting the Sealnado, it is recommended to use a Cutlass Supreme and at least a Log Suit.

Fighting in the ocean[]

The Sealnado's attack timings are the same over the ocean. However, the twister attack will now create waves instead of sucking in the player when on a boat. The Sealnado draws small moving Waves inwards about three times. This is followed by large waves that radiate away from the Sealnado. Damage from the waves can be avoided entirely for 30 seconds by eating a Purple Grouper or a Tropical Bouillabaisse.

Dizzy Sealnado after it's been killed in tornado form. 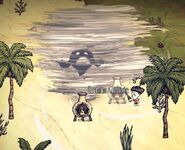 Sealnado as seen in the poster for the Wilbur Vs. The Volcano update.

Sealnado, as seen in the Shipwrecked trailer.