“I could steer toward it and resign myself to a watery fate.”

“It would be no good to run aground of that.”

“It would be easy to wreck a vessel on one of those.”

“We hope no one crashes their boat on that!”

“It's a big rock in the middle of nowhere.”

“It would be quite a shock to hit that rock.”

“Rocks off the port bow!”

A Sea Stack is a naturally spawning object exclusive to Don't Starve Together, introduced in Return of Them. They are stationary obstacles located in the Ocean.

When hit by a Boat, they cause damage to its health. They might also be destroyed themselves if enough damage is done. When destroyed or mined, they drop four Rocks. Some of them may sink in the ocean and cannot be retrieved. 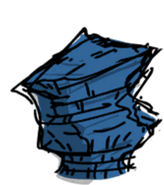 old texture
Add a photo to this gallery
Retrieved from "https://dontstarve.fandom.com/wiki/Sea_Stack?oldid=491927"
Community content is available under CC-BY-SA unless otherwise noted.