“That better not be poisonous.”

“Stay away from Wolfgang!”

“One sting and it could be over.”

“Scorpiones. But I'm not sure of which subspecies.”

“You'll not be stinging me.”

“A wonderful example of a predatory arachnid! And poisonous to boot!”

“Keep your stinger to yourself, mister!”

Scorpion is a Mob exclusive to the Don't Starve: Hamlet DLC.

It can be found in Ruins, under Stone Slabs, or from chopped Rainforest Trees. It can also spawn in all sorts of caves, such as Cave Clefts or Mant Hills, or falling from above during a Cave-in.

It is a very aggressive Mob and will attack nearly everything that crosses its path, with the ability to inflict poison when attacking with its sting. It also has the ability after being hit to reel back against it's attacker and charge again shortly after, thus making difficult to kite in tight spaces. The charge cannot poison, however and it must attack within melee range in order to inflict the status.

After reeling back, the Scorpion will only charge the player if they are outside of its normal attack range. An effective tactic is to hit them and then chase them during their retreat. This will force them to perform a normal melee attack instead of a charge, which can be easily avoided with a back step and followed up with another strike on the Scorpion. Take care when using this method as their follow up attack may be a stinger attack, inflicting poison. Scorpion is one of the few mobs that have the ability to dodge stunlocks.

Scorpions can be caught in Traps, killing them instantly and giving their drops as if they had died in combat. 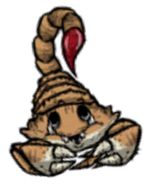