"Build yourself a fly flue."

“Wolfgang hope does not burn moustache.”

“No need to lean in and check if it's hot. I can feel it from here.”

“DO YOUR WORST. I AM INCAPABLE OF SWEATING.”

“The magic of the two gems keeps it burning at maximum strength.”

“I'm sweaty enough without help from a furnace.”

“The red gems are producing a sweltering heat.”

“What a handsome fire!”

“Pretty fancy for a heater.”

“A cage to hold the dragon's rage.”

“Can I cook marshmallows over it though?”

“Maybe I'll just take a moment to warm up these old bones of mine.”

The Scaled Furnace is a craftable Structure exclusive to Don't Starve Together, introduced in A New Reign. It can be found in the Structures Tab after the player obtains the Blueprint by either killing the Dragonfly or as a random drop from Loot Stash, after killing Klaus. It can then be crafted using 2 Red Gems, 10 Charcoal and 1 Scales. The Furnace provides heat (which can quickly overheat the player), and light, but only in a very small radius, and allows the player to cook Food. Currently, this structure affects the player in the same way as the Magma Pools found in the Desert biome, except it won't set the player on fire.

Scaled Furnace as seen in the poster for the Warts and All update.

Willow next to a Scaled Furnace.

The Salad Furnace in comparison to the Scaled Furnace. 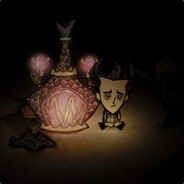 Wilson sitting near the Scaled Furnace at night.

Different skins of Scale Furnaces in the dark

Different skins of Scale Furnaces in the light

On the map
Community content is available under CC-BY-SA unless otherwise noted.
Advertisement