"A sturdy and fireproof container."

Can hold 12 items.
Impervious to flame.

“Next best thing to a lockbox!”

“I'm not sure why you'd want something that DOESN'T burn...”

“Chest is not afraid of fire.”

“Scales! Scales are the winner!”

“Those scales sure are nifty.”

“The contents are currently incombustible.”

“Who doesn't need a fireproof chest?”

“For the snootiest of snoots.”

“We'll have to find something worthy of going in there.”

“Now that I'm not worried about my things burning up, I can worry about everything else.”

The Scaled Chest is a craftable container in the Reign of Giants DLC. It requires an Alchemy Engine to prototype, and costs 1 Scale, 4 Boards, and 10 Gold Nuggets to craft. Unlike the regular Chest, the Scaled Chest is fireproof and has 12 slots, as opposed to the normal Chest's 9 slots.

Items can be stored in a Scaled Chest by dragging them onto it or by opening the Chest to place them in specific slots. Chests help keep items better organized than by dropping them on the ground. Note that there are four Mobs in the game that can steal from, or knock items out of, chests; Splumonkeys, Krampus, Slurtles, and Bearger.

In the Hamlet DLC, the Scaled Chest crafting recipe is unavailable, however, a Blueprint for it can be bought with 200 Oincs from The Tinkerer's Tower. The Scales are available at 'The Sty' Oddities Emporium. Additionally, the Scaled Chest can be opened by Pogs. 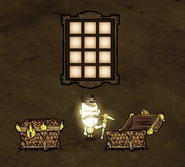