“Keeps the water at bay.”

“Building dams is my specialty.”

“A bag of dirt that keeps water out.”

“Theoretically, it will stem the tide. For a little while.”

“IT HOLDETH BACK ONLY LITTLE TIDES”

“Even small sandbags are heavy to carry around all the time.”

Sandbags are a craftable Structure in the Shipwrecked DLC. It is crafted with 2 Cloth and 3 Sand, and yields 4 Sandbags when crafted. It is used to prevent Flooding by barricading tides rising from the shore, or filling the puddles that appear during Monsoon Season.

Although they count as Walls, unlike other walls, they are allowed to be placed very close to existing structures. Mobs may attack Sandbags if it is in the way to their target. As with any Wall, Sandbags can occasionally be targeted and destroyed by Spiders.

Both Puddles and Tides can be stopped by placing Sandbags in front of them, but if a puddle is not completely surrounded it can continue to expand in any direction which isn't blocked by a Sandbag. This means that given enough time or a small enough wall, a puddle can seep around a wall of sandbags and overtake it. However, a complete encirclement of sandbags can keep a puddle from getting in or out, allowing you to either contain a puddle in one spot where it starts or keep a small area from being touched. Puddles can also be stopped from expanding by placing a single Sandbag in the exact center, even though this single Sandbag does not block any edges of the puddle. It is not known at this time whether this is a bug or intended functionality. This works for any size of the puddle, as long as the center "eye" is covered with a Sandbag.

Sandbags can be used to absorb puddled areas, creating a dry tile, however if the "eye" of the puddle is still there after being Hammered, the area will be immediately flooded again.

Hammering a placed Sandbag that is blocking a puddle will cause the puddle to immediately extend. Hammering a Sandbag will drop 2 Sand if it was undamaged, otherwise it will drop 1 Sand.

A valid method to use Sandbags to stop a puddle from expanding. 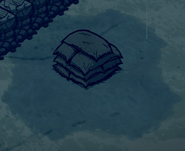 Alternative method applied at a later stage to the puddle on the left. Puddle on the right is not stopped in any way.

Puddle expansion towards the Crock Pot is stopped by proper use of Sandbags.

However, expansion will continue in other directions, and can get around the Sandbags if given enough time.

A base protected from flooding by sandbags