“Maybe they'd be willing to trade.”

“Is having things for Wolfgang?”

“They appear to have been quarantined. How foolish.”

“What a funny face you have!”

Sammy, the Lucid Bog Merm is a Mob exclusive to the The Gorge event in Don't Starve Together. He can be found near the starting area, selling various seeds. 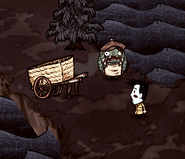 Sammy found at his usual spot trading with the player.

Sammy as seen in the Gorge cinematic.

Sammy as seen in the Gorge cinematic.

Sammy as seen in a drawing from Art Stream # 26.
Add a photo to this gallery
Retrieved from "https://dontstarve.fandom.com/wiki/Sammy?oldid=489855"
Community content is available under CC-BY-SA unless otherwise noted.