"Lets you sit on animals. In theory."

“That'll allow the mounting of some smelly animal.”

“As if it wasn't already burdened by the yoke of life...”

“A crude device for equestrianism.”

“But that means I'd have to touch the smelly thing.”

“A rudimentary seat for traversing on domesticated animals.”

“'TIS SEAT FOR HAIRY BACK RIDE”

“Hee-hee, has little horns on it!”

“Guess you need a saddle to ride some animals.”

The Saddle is a Tool item that can be used to mount Beefalo. It is crafted at the Alchemy Engine with 4 Pig Skins, 4 Gold Nuggets and 4 Beefalo Wool.

To mount a Beefalo, the Beefalo in question must first be tamed by feeding it Cut Grass, Cut Reeds, Twigs, or any Vegetable and Fruit. Afterwards the Saddle may be placed on the Beefalo to allow mounting. If a player attempts to saddle a Beefalo with obedience lower than 10%, it will reject the saddle and attack the player.

After some time being mounted, the Beefalo will eject the mounted player. No damage is inflicted to the player upon being dismounted, and the Beefalo can be mounted again immediately afterwards.

"A throne for the boss of the battlefield."

“The only problem is the saddle sores.”

“I'm going to raze some villages!”

“Oh, how we bend creatures to our ill intent.”

“A favorite perch of generals and assorted warlords.”

“At least it affords some dignity to the rider.”

“Requires a small sacrifice of rabbits for the sake of a war machine.”

“We'll have lots of fun riding on this.”

“A saddle fit for a queen.”

“Fit fer an'admiral that is.”

“Extra durable for the extra adventurous.”

“Alright, who wants to fight?”

“Will fight for glory of Mermfolk!”

“It's almost as comfy as sitting in Woby's fur.”

The War Saddle is a variant of the normal Saddle that can be used 3 more times than normal, and also adds 16 bonus damage to attacks made while riding the Beefalo. It requires 4 live Rabbits, 10 Logs, and 4 Steel Wool to craft, and an Alchemy Engine to prototype. In Don't Starve: Reign of Giants the bonus damage from the War Saddle will only be effective if the player either has nothing equipped in the hand slot, or has one of a limited number of items equipped, such as a Lantern or Umbrella. For a complete list of items that will deal increased damage while riding a War Saddle, see the main article on Beefalo.

“Too much whimsy gives me indigestion.”

“DOZENS OF CREATURES WERE MAIMED FOR THIS. HAHA”

“The decorative antennae are a lovely touch.”

“Makes me feel like some sorta woodland nymph, eh?”

“But is it fast enough to escape the judgmental stares?”

“It's a saddle made out of spidersnacks!”

“Adds a little spice to my ride.”

“Woowee! You can really get some speed on this!”

“Still wouldn't keep up with a Leapin' Lena...”

“Butterflies good for something, flort!”

“See? Bugs are helpful in lots of ways!”

“This should help my beefalo pick up the pace.”

The Glossamer Saddle is a variant of the normal Saddle that can be crafted using 2 Living Logs, 4 Silk and 68 Butterfly Wings. It requires an Alchemy Engine to prototype. This saddle increases the riding speed of the Beefalo. 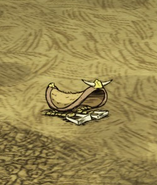 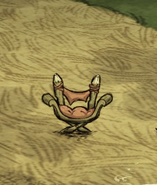 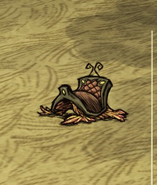 Wilson riding a Beefalo in the New Reign teaser.

Saddle as seen in a promotional image for an update to Don't Starve Together.
Español
Community content is available under CC-BY-SA unless otherwise noted.
Advertisement