Edit
watch 02:23
Wiki Targeted (Games)
Do you like this video?
Play Sound

Runic Turf is a Turf that can only be found in a Ruins. Although it can be removed from the ground using a Pitchfork, it cannot be acquired or put in the inventory. Runic Turf has three different textures and colors according to its appearance on the map; Brick ,Tile , and Trim.

Plants like Berry Bushes, Grass Tufts, Saplings, Spiky Bushes, Lureplants, Pine Cones, and Birchnuts can be planted on any kind of Runic Turfs. Lureplants, and their Eyeplants, will spawn on this turf as well.

Runic Turf is a very good indicator to the different phases of the Nightmare Cycle. 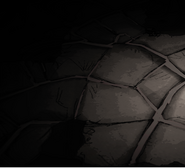 Wilson on some Runic Turf at Nightmare State, as seen in the The Stuff of Nightmares trailer.
Community content is available under CC-BY-SA unless otherwise noted.