“Rocks will be ours!”

Rockyland is one of the Biomes in the game.

Rockylands tend to have few things growing on them, although the occasional Evergreen Tree, Sapling, or Grass Tuft may sneak in on the edge. Redbirds and Snowbirds do not spawn here, only Crows.

This is one of the native habitats of Tallbirds and their Nests. In addition, Boulders and Mini Glaciers are plentiful and the ground is covered with a combination of Rocky Turf and barren turf.

Rarely, there is a branch of this biome which is infested with Spider Dens packed together, making travel quite dangerous. Gold Nuggets may also be found on the ground in this biome branch.

Berry Bushes, Saplings, Grass Tufts, Spiky Bushes and Evergreens cannot be planted on Rocky Turf. It must first be removed with a Pitchfork in order to plant. This turf can be combined with 1 Boards to produce Cobblestones, which are placeable Roads.

In Don't Starve Together, Grass Gekkos may spawn in groups in the Rockyland. Also Meteors will often fall in this biome, so broken Boulders and Moon Rocks can be found there. 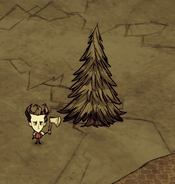 A Tree that spawned in Rockyland.

A Rockyland, as seen on the Map.
Add a photo to this gallery
Retrieved from "https://dontstarve.fandom.com/wiki/Rockyland?oldid=344713"
Community content is available under CC-BY-SA unless otherwise noted.