"A chunk of rocky ground."

“Not especially good for planting.”

“Do I really need to drag these rocks around with me?”

“That's a chunk of rocky ground.”

Rocky Turf is one of the Turf items, acquired by digging Rockyland tiles with a Pitchfork. Like other Turfs, it can be placed on any bare ground tile or it can be used as fuel. It can also be used to craft Cobblestones, which are placeable Roads.

Berry Bushes, Saplings, Grass Tufts, Spiky Bushes, Pine Cones, and Birchnuts cannot be planted on Rocky Turf. Eyeplants cannot spawn on this Turf, so it is great for planting Lureplant farms while not spending any more resources than those used to craft the Pitchfork.

When placed on the Surface World and the area is large enough, Crows are the only Birds that will spawn and land on these turfs.

In Shipwrecked, floods can start on this turf.

In Don't Starve Together, Rocky Turf can be crafted with 1 Rocks and 1 Flint in the Landscaping Tab. As with all Landscaping Tab items, it cannot be prototyped and Characters must stand near a Terra Firma Tamper to craft it. 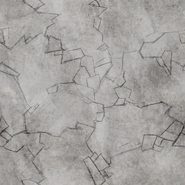 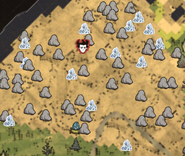 Rocky Turf as seen on the map.
Español Polski
Community content is available under CC-BY-SA unless otherwise noted.