Don't Starve Wiki
Register
Don't have an account?
Sign In
Advertisement
in: Mobs, Return of Them, Monsters, Ocean
English

“Are you here to send me to a watery grave?”

“I AM NOT MEAT YOU THICK SKULLED NINCOMPOOP”

“Fascinating! The entire jaw seems to be comprised of living stone!”

“What a nasty creature. I wish I'd thought of it.”

“I'm sure you can find something much tastier to eat elsewhere!”

“Don't eat me, you'll get fur stuck in your teeth!”

“Just look at the size of those teeth!”

“Ah, I almost forgot. Another reason to stay away from the ocean!”

Rockjaw is a shark-like Mob exclusive to Don't Starve Together introduced in Return of Them.

Every time a fish school emerges in Rough or Swell Ocean near player, there is a 7.5% chance that a Rockjaw also appear. When killed, the Rockjaw drops four Raw Fish.

The Rockjaw is aggressive towards anything that isn't another Rockjaw, even flying birds. When fighting Creatures on water, it simply swims up to it and bites it, dealing 30 damage, before kiting it by swimming away for about 6 seconds and attacking again.

When fighting creatures located on a Boat, they jump on the Boat and perform a triple AoE attack before going back into the water. If a Rockjaw jumps on the boat three times without hitting a player with its attacks, it will lose interest and begin roaming again. Just like Beefalos and Bunnymen, a Rockjaw regenerates lost health over time, taking 3 days to regenerate its full health.

If a Rockjaw is attacked, Rockjaws nearby will also join the fight. It will despawn when unloaded from the player's vicinity.

Below is the number of hits it takes with each weapon to kill a Rockjaw when playing with characters with a default damage modifier. The Weather Pain is not included due to the random nature of its projectile.

It takes 3 blasts to freeze a Rockjaw with an Ice Staff. It takes 4 Sleep Darts to put Rockjaw to sleep.

A Rockjaw sleeping in the ocean.

A Rockjaw sleeping on a boat. 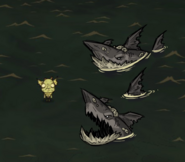