Can camouflage which absorbs 95% damage, passively regenerates health. Eats minerals from the ground.

“It has terrifying claws.”

“We don't have much in common.”

“What terrible sights they have seen.”

“MY SHELL IS NICER”

“Their carapace is made of rocks.”

“I banished these guys for a reason.”

“A geological golem! If only it could answer my many questions.”

“Can a rock possess a soul?”

Rock Lobsters are neutral Mobs found in Caves. They eat all minerals except for Marble, all of which can be given to them to befriend them. They grow over time, slowly regenerate their health, and come in a variety of colors. They are also immune to the freezing effect of the Ice Staff.

When killed, they shatter and drop Meat, Rocks, and Flint. They can be found in the Rocky Plains Biome.

Rock Lobsters are slow-moving and live in herds. They repopulate and grow over time every 4 days; while they do so, their size, Health, and damage output increase. They roam around looking for Rocks and Flint to eat, only fighting when they are provoked. When attacked, Rock Lobsters hide by mimicking large stones. While hiding, their stone shells absorb 95% of damage.

Like Pigs, Rock Lobsters can be convinced to follow and fight for the character when given any minerals such as Rocks, Flint, Gold Nuggets, or any Gems; however, they only follow for about 3 minutes (6 segments) per item (the "elemental" value of the item does not factor in to this). Each additional elemental item fed to the Rock Lobster will increase the loyalty time by another 6 segments, up to a maximum of 40 segments, or 2.5 days (same as Pigs).

Rock Lobsters will go to sleep after spending 2 days awake. A sleeping Rock Lobster will awaken after half a day asleep. Time of day or darkness level does not factor into their sleeping habits. A Rock Lobster may also be put to sleep with the Pan Flute or with three Sleep Darts.

The Rock Lobster regenerates 10 HP per second while in camouflage.

Rock Lobsters have high health and protect themselves from damage. They also live in herds and will defend each other when necessary. Additionally, their health slowly regenerates. All of this taken together means that Rock Lobsters are very difficult to kill. When possible, it's a good idea to separate one from the group before fighting it, or use ranged weapons since they are slow-moving, which allows for multiple hits in a short time.

Also an effective way to kill the Rock Lobster is to kite: hit it and run out of its range before it can hit back. It is also noted that while a Rock Lobster is sleeping, one can kill it with Gunpowder or Slurtle Slime, as once lit, those explosives will deal large amounts of damage to groups of sleeping Rock Lobsters, and they will not wake up and aggro the player. 9 Gunpowder can easily take out a fully grown Rock Lobster.

Below is the number of hits it takes with each weapon to kill Rock Lobsters and their offspring when playing with characters with a default damage modifier. The Weather Pain is not included due to the random nature of its projectile.

Rock Lobsters take 3 Sleep Darts to be put to sleep.

In Don't Starve Together, Rock Lobsters cannot be brought to the surface.

Four Rock Lobsters, one of which is hiding.

Wilson with a small Rock Lobster.

Wilson being attacked by a full-sized Rock Lobster. 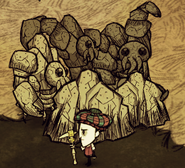 Rock Lobsters fighting each other. 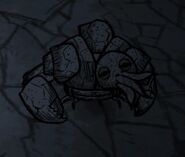 Rock Lobster featured in the It's not a rock! poster.

A Rock Lobster spawned outside the map. 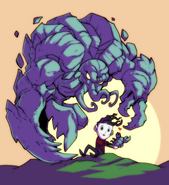 A Rock Lobster as seen in a drawing from Art Stream # 29.
Add a photo to this gallery
Retrieved from "https://dontstarve.fandom.com/wiki/Rock_Lobster?oldid=468342"
Community content is available under CC-BY-SA unless otherwise noted.