Roads can be found throughout the world. Walking on Roads allows the player to move 30% faster. Roads often connect two Pig Villages to each other in Survival Mode.

Roads are different from Cobblestones and cannot be dug up. Cobblestones are Turf items, craftable by the player, that act like Roads when placed on barren land. These can be dug up and replaced using the Pitchfork. A road's speed boost can be stacked with the Walking Cane and Magiluminescence.

Trail (commonly referred to as Path) is a re-textured, transparent version of the Road. Likewise, it gives the same speed boost to players that are moving on it.

Trails are displayed differently than Roads on the map. Identical to Roads, they cannot be dug up as Turfs, though the ground directly beneath can still be dug up. They appear more frequently than Roads and may also lead the players to Things, Pig Villages or Ponds.

Roads appear dark-gray on the map, while Trails appear light-brown. 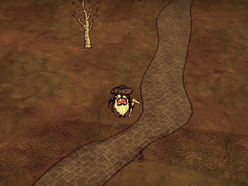 A Road and Trail overlapping each other. 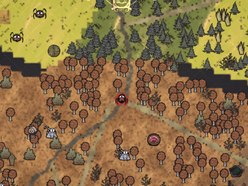 On the map, Roads appear dark-gray, while Trails appear light-brown.

Roads and Trails on the map in older versions of Don't Starve. 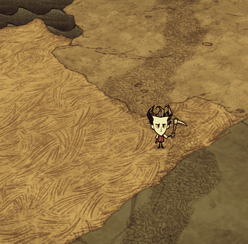 An old version of the trail.

A Road that goes over the ocean. 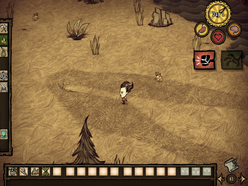