“Brotherly camaraderie will not save you.”

“YOU CORRUPT THAT MACHINE ON YOUR HORN!”

“Prone to unnecessary displays of masculinity.”

“Am I supposed to be impressed?”

“They not so tough, flort!”

The Rhinocebro Snapback and the Rhinocebro Flatbrim are mobs exclusive to The Forge event in Don't Starve Together. They appear after the Grand Forge Boarrior and its accompanying wave have been defeated.

The Rhinocebros, after being summoned from the opposite sides, appear to buff each other by calling out to each other to deal greater damage at any time; whenever they do this, they quickly attempt to regroup to each other, this is also more powerful than the Life Blossom's effects, making them able to get off their hits before sleeping again. The damage buff gained by their battle cries is permanent, lasting through the rest of the round, and can stack with any subsequent buffs. However, it is possible to interrupt their battle cries by stunning them via chucking Lucy as Woodie, or with the special attacks of most weapons. Should one Rhinocebro get his buff interrupted, the other one will stop buffing as well.

The Rhinocebros, unlike all other enemies so far, do appear to show off a physical change as the battle prolongs and they take damage. If a Rhinocebro dies, the next one alive will swiftly attempt to revive his brother, and follow up with chest bumping each other, which deals damage if a player is caught between them. They appear to do quick, area of effect swipes with their horns as well as a horn charge that deals line damage and may hit the player(s) twice. The area of effect of the swipe attack is quite large and range players should stay as far as possible.

The Rhinocebros can get petrified and they seem to be slightly more affected by it than the Boarilla, Grand Forge Boarrior, or Infernal Swineclops, but they still manage to break free, quicker than the lesser mobs.

Once the Rhinocebros die, Battlemaster Pugna calls out the Infernal Swineclops to the ring.

There are unimplemented dialogue strings spoken by the brothers under certain conditions.

A brother is defeated

They are the winners 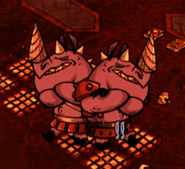 Rhinocebros after defeating all players. 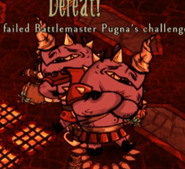 Hurt Rhinocebros after defeating all the players.