"Shave off your dirty beatnik beard."

Shave your beard and beefalos

“A sharpened rock tied to a stick. For hygiene!”

“Why did I build this?

“My skin is too strong for hairs!”

“This is just for shaving.”

“If only the world had a single neck.”

“Theoretically, it can be used to shave an animal.”

“A small blade, but a blade nönetheless.”

“I watched my father use one of these.”

“You're not coming near my legs!”

“If only I had aftershave.”

“Never hurts to have more tools.”

“I found a whisker on my chin, I'm sure my beard will come in any day now.”

The Razor is a craftable Tool Item found in the Tools Tab. It requires 2 Twigs and 2 Flints to craft, and a Science Machine to prototype. Unlike other Tools, on pc it cannot be equipped, and to be used it has to be lifted and used on a target instead. Players using a Controller have to simply be near an entity that can be shaved for the "Shave" prompt to appear. Since it has no durability, the Razor has infinite uses.

The Razor can be used to shave Wilson's Beard, which provides leftover Beard Hair. To shave the Beard, simply right-click the Razor while it's in the inventory, or hover over the target. The amount of Beard Hair received depends on the beard's length. The Razor can also be used to shave Beefalos while they are sleeping (whether at night or when put to sleep using Sleep Darts, a Life Giving Amulet, or a Pan Flute), resulting in 3 Beefalo Wool. This requires taking it out of the inventory and hovering over the beefalo. The Beefalo will not wake up after being shaved, but Beefalo in heat will sometimes wake up and attack.

In the Reign of Giants DLC (and by extension, Don't Starve Together), Webber can also use the Razor to shave his Beard. The amount of Silk received depends on the Beard's length.

At this point, in the Shipwrecked DLC, the Razor cannot be used to shave Water Beefalo.

In the Hamlet DLC, Razors can be used to shave Hedges for 1 Clippings each. 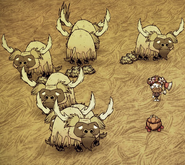 Beefalo after being shaved.

Wilson surrounded by Beard Hair after getting a shave.