“Their bitter end protects me from the bitter cold.”

“I WILL UTILIZE THEIR FURRINESS”

“Poor Leporidae. At least my ears will be warm.”

“Where I'm from these would only work in the fall.”

“Strap some rabbits to our head, good idea.”

“Keeps my ears fluffy and warm.”

“The rabbits whisper their secrets to me.”

“They weren't made for floppy ears.”

The Rabbit Earmuffs are a Hat Item found in the Dress Tab. It requires 2 Rabbits and 1 Twigs to craft and a Science Machine to prototype. Beardlings are an acceptable substitute to be used as Rabbits in the crafting recipe. A Sewing Kit repairs it to full durability.

It is a tier 1 warm clothing, increasing the time a character can be without a fire during the Winter before Freezing. It has an insulation factor of 60.

The Rabbit Earmuffs can be given to a Pig or Bunnyman to wear, which provides no effect. It will still lose durability while worn.

In the Hamlet DLC, Rabbit Earmuffs can be bought for 5 Oincs at The Sow's Ear Hat Shop in the Pig City.

Rabbit Earmuffs as seen in the poster for the Doorway to Adventure update.

Rabbit Earmuffs as seen in the Winter's Feast update poster. 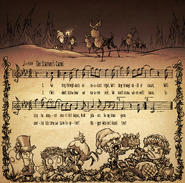 1 of 22
Retrieved from "https://dontstarve.fandom.com/wiki/Rabbit_Earmuffs?oldid=451872"
Community content is available under CC-BY-SA unless otherwise noted.