Rabbits are small animals commonly found in Grasslands and Savannas. They provide a steady source of food by dropping morsels when killed. Rabbits are passive creatures and will run towards their holes when the character gets too close. They are considered innocent creatures and killing one adds 1 point to the player's naughtiness level, which when high enough will cause Krampus to appear. Rabbits take one blast from the Ice Staff to be frozen.

All rabbits are linked to a nearby rabbit hole. Rabbits run back to their holes at dusk, or when they are frightened. When a rabbit is captured or killed it will respawn in its hole after a short delay. A rabbit hole can be dug up with a shovel to force the rabbit out; however this will destroy the hole preventing future rabbits from spawning there. If a rabbit is caught outside its hole after dark for any reason it will fall asleep.

Probably the cheapest method in terms of prerequisite resources:

Rabbits caught in traps become live inventory items. While they do not stack, they also do not perish and thus can be safely stored for long periods of time. Captured rabbits can be killed in inventory by pressing RMB to get morsels, or be cooked straight into cooked morsels on fire. Even if captured, rabbits will turn into beardlings when the player character's sanity level drops low enough.

When character's Sanity drops below 80 (60 for Wes) all rabbits will turn into Beardlings. They behave just like normal rabbits but are covered with black Beard Hair. They can be killed to acquire Beard Hair, Monster Meat and Nightmare Fuel, or cooked on fire to get only Cooked Monster Meat. Beardlings do not drop Morsels. Killing Beardlings is one of the two ways to get beard hair while not playing as wilson, the other being a skeleton. All rabbits, including those already captured and stored (inventory, backpacks, chests) will become Beardlings. Just like rabbits they are considered innocent creatures and killing one adds 1 point to the player's naughtiness level.

Like many other monsters, Beardling have an insanity aura and will lower the player's sanity level when you are in close proxmity for an extended time.

Beardlords are the Bunnyman equivalent of Beardlings. 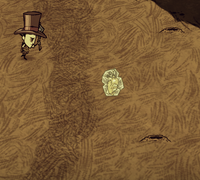 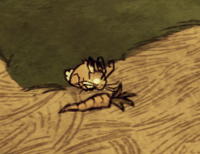 A rabbit that has turned white in the winter.
Add a photo to this gallery
Retrieved from "https://dontstarve.fandom.com/wiki/Rabbit?oldid=73076"
Community content is available under CC-BY-SA unless otherwise noted.