) min in Summer
(10 min in Spring and Autumn

“Fire on the inside is amazing!”

“IT HAS AN EERIE LIGHT”

“Carving the Cucurbita pepo is such a nice pastime.”

“It'd better not tip over.”

“Strange. The length of its light emitting properties vary depending on the season.”

“Who knew bugs and a rotting vegetable could be so comforting.”

“Has a friendly face, flort.”

“I heard a radio show once about a horseman with a pumpkin for a head!”

“It's honestly one of the least spooky things around here.”

A Pumpkin Lantern or Jack o' Lantern is a stationary light source, though it can be carried in the inventory and (re)placed any time. It requires 1 Pumpkin and 1 Fireflies to craft and an Alchemy Engine to prototype. It only illuminates during dusk and night.

The Pumpkin Lantern perishes (leaving nothing) after being on the ground for 10 minutes (1 ¼ game days) in Summer and after 13 minutes 20 seconds (about 1 ¾ game days) in Winter. Once on the ground, it can be picked up by pressing the Space Key at any time or by Left Mouse Button (LMB) while not having any tools or weapons equipped; otherwise, it will be attacked and smashed, leaving the Fireflies behind (which can be seen at night).

In the Reign of Giants DLC, the Pumpkin Lantern lasts for 8 minutes in Summer, 10 minutes in Spring and Autumn, and 13 minutes 20 seconds in Winter.

In Don't Starve Together, the Pumpkin Lantern lasts significantly longer, taking 42 minutes 40 seconds to perish in Summer, 53 minutes 20 seconds in Spring and Autumn, and 71 minutes 6 ⅔ seconds in Winter.

During the Hallowed Nights, Pumpkin Lanterns will spawn around the Florid Postern and in Pig Villages. They can be picked up and moved as normal, and are only there for decoration. Additionally, Pumpkin Lanterns will last four times as long, taking 170 minutes 40 seconds to perish in Summer, 213 minutes 20 seconds to perish in Spring and Autumn, and 284 minutes 26 ⅔ seconds in Winter. 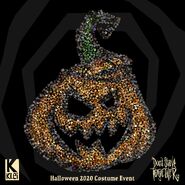 A composite image of a Pumpkin Lantern made from submissions to the Klei Halloween 2020 event.
Français
Community content is available under CC-BY-SA unless otherwise noted.
Advertisement