“IT HAS EXCESSIVE RPMS”

“Of the Ornithorhynchidae family I believe.”

“Incredible! It's spinning at subsonic speeds!”

“Have at thee, skewered öne!”

“He could skewer me!”

“Excuse me while I avoid your quills.”

The Platapine is a neutral Mob exclusive to the Hamlet DLC which spawns in the Lily Pond Biome. Similar to how Gobblers spawn from Berry Bushes, they will spawn when a Lotus Plant is picked, and will proceed to consume the Flowers of all nearby Lotus Plants if not stopped. They defend themselves with a spinning dash that allows them to flee or inflict damage on enemies. They are stunlockable and will help each other. 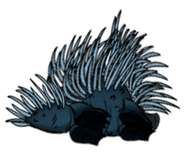