“Maybe they'd be willing to trade.”

“Nice hat. Are you selling that, too?”

“Is having things for Wolfgang?”

“They appear to have been quarantined. How foolish.”

“Hyuyu, what a funny moustache!”

Pipton, the Cognizant Bog Merm is a Mob exclusive to the The Gorge event in Don't Starve Together. He can be found in the Sugarwood Memorial park area, selling various advanced items. Due to his location, Pipton is only accessible after purchasing the Iron Key from Sammy, making him more oriented towards the late game.

Anything bought by Wes costs one less Old Coin except those that already cost one. 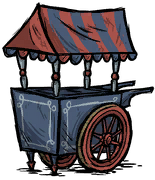 Pipton as seen in the Gorge cinematic.

Pipton as seen in the Gorge cinematic.

Pipton as seen in a drawing from Art Stream # 26.
Tiếng Việt
Community content is available under CC-BY-SA unless otherwise noted.
Advertisement