“I could fill them with flammable gas.”

“These look as deflated as I feel...”

“Those look much too jovial for my liking.”

“It's been left completely breathless.”

“No fun without Wes.”

“Everyone has their forte. Some bend time, others bend balloons.”

Pile o' Balloons is a character-specific object belonging to Wes, placed in his inventory at the beginning of the game. It allows Wes to blow up balloons, at a cost of 5 Sanity each.

“How are they floating?”

–Wilson, when examining a Balloon

“That's just asking to be popped.”

–Willow, when examining a Balloon

“Is full of clown breath!”

–Wolfgang, when examining a Balloon

“A colorful reminder that my childhood is no more.”

–Wendy, when examining a Balloon

“WX-78 CANNOT BE FOOLED. THESE ANIMALS ARE NOT REAL.”

–WX-78, when examining a Balloon

“Could serve as a suitable diversion.”

–Wickerbottom, when examining a Balloon

–Woodie, when examining a Balloon

“This seems out of place here. Too cheery.”

–Maxwell, when examining a Balloon

–Wigfrid, when examining a Balloon

–Webber, when examining a Balloon

–Warly, when examining a Balloon

–Wormwood, when examining a Balloon

–Winona, when examining a Balloon

–Wortox, when examining a Balloon

–Wurt, when examining a Balloon

“My keen tracking senses are telling me there's a clown nearby.”

–Walter, when examining a Balloon

“Balloons have such a short lifespan.”

–Wanda, when examining a Balloon

Balloons spawn in a variety of colors and shapes, and they can be pushed around. Balloons have a small chance of distracting mobs (who will attack the balloons instead of the player). They will pop if attacked, or if a nearby balloon pops, setting off a chain reaction. Popping a balloon causes 5 damage. Like all Character-Specific Items, this item shows on the map when dropped.

In the Reign of Giants DLC, Wes can give his Pile o' Balloons to a Catcoon in order to befriend it. If the Catcoon dies, he will be able to get it back.

"If only there was an easier way."

. If the Pile o' Balloons is left on the ground for 3 days it will become 2 Mosquito Sacks.

In DST, Balloons can be crafted from the Balloonomancy Tab with 5

and a Pile o' Balloons. There are additional balloon designs exclusive to DST. Together with the four classic designs, there are nine balloon designs in total. Besides the classic oblong balloon, the eight other models are designed after the mobs of the constant: Spiders, Beefalos, Pigmen, Bunnymen, Mermfolk, Hounds, Tentacles and Butterflies. They can be held by equipping them to the hand slot, and can be picked up and put in the player's inventory, getting hit by any source of damage will drop the balloon if held in the hand slot. Each model has their unique icon for inventory slots but they will all appear orange inside the inventory. Including Orange, the six possible balloon colors are Red, Yellow, Green, Blue and Purple.

"Makes you light on your feet."

“The hole in the center makes it more aerodynamic, that's just physics!”

“Thanks! I'll be able to set fires twice as fast with this thing!”

“Clownman has mighty lungs to make balloon so big!”

“Will it make me swift enough to outrun my problems?”

“IT DEFIES ALL LOGIC”

“The chemical composition of the young man's breath must be fascinating.”

“Now how do you figure that works, Luce?”

“The mime's power unsettles me.”

“Grant me the speed öf Hermöd!”

“Circles must be the speediest shape.”

“With this gift, I'll be more swift!”

“Clowns have strange and mysterious ways...”

“Well, that was short-lived.”

The Speedy Balloon is crafted from the Balloonomancy Tab with 5

and a Pile o' Balloons. When equipped, it increases the player's movement speed for a limited amount of time, as indicated by the balloon slowly shrinking into itself until the hole in the middle is closed completely. If the player lets go of the balloon while it isn't at 0% durability, it will float away after 1.5 second of being on the ground. Getting hit while holding the balloon will drop it on the ground and if not picked up immediately will float away and disappear. The floating balloon has the benefit of being seen on other players' maps, so that players can indicate their position similar to the use of a Flare.

“How did he get the smaller balloons inside?”

“Hey, when are you gonna make a hot air balloon? I could help!”

“What is the point of celebrating in a place such as this?”

“A reasonable amount of cheer every so often would do us good.”

“Uh oh, I didn't forget someone's birthday did I?”

“Oh no... he's managed to make them even more cheerful.”

“We can celebrate once the work is done.”

“Huh? There stuff inside!”

“Is someone having a party?”

The Party Balloon is crafted from the Balloonomancy Tab with 5

and a Pile o' Balloons. When popped, it provides an area of effect sanity equal to 4x the amount of players in its radius to all players up to a maximum gain of 16 sanity per balloon (4 from each of the four sanity ticks.) Getting hit while holding the balloon in the hand slot will drop it on the ground.

Eliminates damage from falling into ocean.

“If the bright colors don't attract some horrible creature, the squeaking will.”

“Wolfgang will try not to pop little vest with his mighty muscles.”

“Why try to prolong the inevitable?”

“I applaud your attempt at practicality, dear.”

“I think I'd rather drown.”

“We should take it on our boat trips.”

“A bright balloon vest to wear across my chest.”

“I guess it's better than not having a life jacket at all...”

“If it keeps me from drowning, I'll wear it.”

The Inflatable Vest is crafted from the Balloonomancy Tab with 5

“The static does terrible things to my hair.”

“Can he make one for Abigail?”

“IT SERVES NO PURPOSE OTHER THAN BEING UGLY”

“I believe it's meant to evoke the image of a Lagomorph.”

“We can all appreciate nature in our own way.”

“Would I really stoop so low as to wear such a thing?”

“Cute, but it won't protect your noggin' from much.”

“I'm likely to get lightheaded from wearing it, hyuyuyu!”

The Balloon Hat is crafted from the Balloonomancy Tab with 5

and a Pile o' Balloons. When equipped to the head slot, it will prevent lightning strikes and provide wetness resistance. Much like the vest, taking any physical damage or letting it reach 0% with it equipped will pop it and deal an additional 5 damage that does not bypass armor

Wes surrounded by balloons in a promotional image. 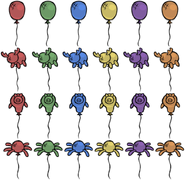 All the shapes and colors of balloons in DSA, from top to bottom: normal Balloon, Beefalo, Pig and Spider.

One of Wes' balloons appearing on the right in the poster for the Strange New Powers update.

Wes's balloons as they appear in the trailer for the Strange New Powers update.