“These pigs sure know how to have a good time.”

“It cuts at the darkness.”

“IT GIVES HIM PURPOSE”

“I wonder how it's fueled.”

“How did they do that without thumbs?”

“Great. Now they have fire.”

“It appears to be unusually compelling to those aggressive humanoid pigs.”

“If only we could get closer.”

“I wonder what it means?”

“Bet thet be worth a pretty penny...”

“Those pigs do have nice garden lamps.”

“It lights a flame for all to see!”

“Handy for finding your way in the dark.”

“Maybe those pigs are brighter than I give them credit for.”

The Pig Torch cannot be crafted but can be destroyed using a Hammer or Gunpowder. Deerclops is able to destroy a Pig Torch and Woodie can destroy it in Werebeaver form. A Pig Torch will drop 3 Logs and 1 Manure upon destruction.

Pig Torches can be found with certain Set Pieces, including a square patch of Grass with Pig Torches at the corners and a Maxwell Statue guarded by two rows of Pig Torches. 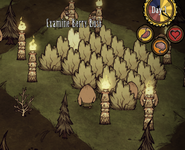 A Pig Torch in a fortress in Adventure Mode displaying its destructibility by Hammer.

A large number of Pig Torches lined up, found in Adventure Mode. 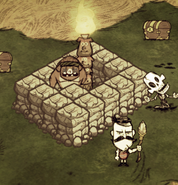 A trapped Guardian Pig near its Pig Torch, unable to reach the player.

Walled off Pig Torches used as a source of light (except during a full moon).
Polski
Community content is available under CC-BY-SA unless otherwise noted.
Advertisement