“He looks like the Pioneer Leader of this troop.”

“He can be reasonable enough once you get to know him.”

The Pig King can be found in one of the Pig Villages that generally spawn in or on the borders of a Deciduous Forest biome, usually at the end of a path. He can be found laying on Wooden Flooring surrounded by Obelisks, and may be guarded by Guardian Pigs if playing in Adventure Mode. He is immune to any damage and cannot be attacked.

During the day, the player can make offerings to the Pig King in exchange for Gold Nuggets. At Night, the Pig King goes to sleep and cannot be traded with. He will not hold any grudge towards the player, even if they kill his fellow pigs or his Guardian Pigs. Despite Pigs hostility to Webber, the Pig King will still trade with him. 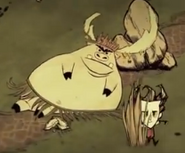 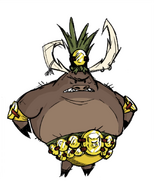