“These pigs have pretty fancy houses.”

“These pigs have questionable taste in architecture.”

“The door is too small for me.”

“At least they are comfortable.”

“THE FURNITURE IS ALL PIG-SHAPED”

“The pig creatures have such prosaic taste in architecture.”

“A little duct tape would fix that right up.”

“It is not a sound structure.”

“That house has been built at an alarmingly obtuse angle.”

“A tall skinny house for a short fat pig.”

“Where the pigs kick back and relax.”

“Should I knock and ask to borrow some bacon grease?”

“A house that I may never enter.”

“Why have a house when you could just camp all the time?”

“All this time and not once have I been invited in.”

Pig Houses are natural and craftable structures where Pigs spawn and live. A Pig is spawned once a Pig House is constructed and respawns after 4 days if killed. Pig Houses are naturally occurring in Pig Villages, with the possibility of the village containing the Pig King. Occasionally, an individual Pig House can be found in the wilderness.

A Pig House requires 4 Boards, 3 Cut Stones, and 4 Pig Skins to craft and an Alchemy Engine to prototype.

At Dusk and Night, Pig Houses with Pigs in them will have a light on. However, as soon as the player approaches the house, the light is switched off. The Pig will relight the light only when the player moves away.

In the Reign of Giants DLC, unlike in the vanilla game, Pig Houses can catch on fire. If the resident Pig is inside the House they will immediately come out to avoid the fire. If the Pig is dead instead, a new one will spawn inside the House and leave, making it possible to bypass the 4 days respawn time.

Pig House with lights on.

Pigs would spawn from Bonfires in the game's alpha test. 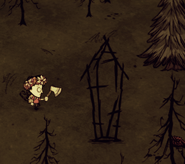 A burnt-down Pig House in the Reign of Giants DLC. 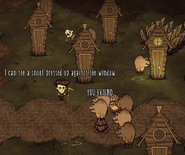 A Pig inside his house during the day. Notice Wilson's quote. 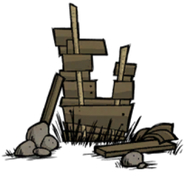 An Unused texture for an Unbuilt Pig House.

A texture for the Rubble of a Pig House, used in The Gorge event.

A Worn Pig House used in The Gorge event. 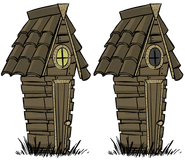 In official game screenshots from early builds of the game
Français
Community content is available under CC-BY-SA unless otherwise noted.
Advertisement