“So that I may penetrate the earth itself.

“A specialized axe for chipping away at rocks.”

“Almost an axe, but not quite.”

“Everybody loves a little mining.”

“A useful tool for acquiring minerals.”

“I can use it tö get preciöus spear and helm materials.

“Rocks will be ours!”

“My back hurts just looking at it.”

“For those tough to crack nuts.”

“Let's get them treasures!”

“Swell. Now I have no excuse not to do back-breaking mining work.”

“Not my preferred kind of manual labor.”

“The quickest way to break stone.”

The Pickaxe is a Tool that can be used to mine Mineable objects. It can be crafted at the beginning of the game with 2 Twigs and 2 Flint. It takes 6 strikes to completely mine down a Boulder. It has 33 uses, and each strike will reduce its durability by 3%. Pickaxes can also be used as a weapon, dealing 27.2 damage per strike. Each strike as a weapon also counts as one use.

Convey an incredibly convincing impression of a pickaxe.
See ingame

Inspired - Elegant
Reavershark
Not many realize the sharpest part of the shark is actually its jawline.
See ingame

“It won't light rocks on fire, but at least it's shiny.”

“At least I can smash rocks with style.”

“The most malleable of metals, but let's see how this mines.”

“Almost an axe, but not quite.”

“This must be game logic.”

“Strange, the gold makes it more durable, not less.”

“The finest pickaxe of them all.”

“I used a precious metal to make a rock smasher!”

“A shiny way to smash up rocks.”

“The mortals say you have to spend gold to make gold.”

“It stronger than normal rock cracker.”

“It makes sense if you don't think about it.”

“Just don't think about it and it'll make sense.”

To mine an object with the Pickaxe, right-click it from the inventory to equip it and left-click on the object. Once the character begins to mine, hold down the LMB or Spacebar to keep mining until the object breaks. Alternatively, one can mine faster by repeatedly clicking LMB with specific timing. 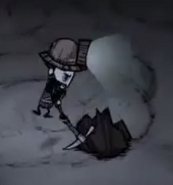 Mining a Stalagmite with a Pickaxe.

Pickaxe as seen in the poster for the Arts and Crafts update.
Deutsch Polski Tiếng Việt
Community content is available under CC-BY-SA unless otherwise noted.
Advertisement