< Pick
Edit
watch 02:56
Raise a Floppa - The Loop
Do you like this video?
Play Sound

“An item with multiple uses.”

“Quite functional, it operates as both an axe and a pickaxe.”

“A revelation! Two tools have been merged into one!”

“I'm picky when it comes to tools.”

“Frees up some pocket space.”

“That's really not my forte.”

“It couldn't decide which to be, so it became both.”

“This will save me precious time!”

The Pick/Axe is a craftable Item found in the Ancient Tab. It requires 1 Luxury Axe, 1 Opulent Pickaxe and 2 Thulecite, and an Ancient Pseudoscience Station to craft. It also has a 5% or 50% chance to be found inside an Ornate Chest or a Large Ornate Chest respectively. Like all items from the Ancient Tab, Pick/Axes cannot be prototyped and Characters always need to be near an Ancient Pseudoscience Station to craft them again.

The Pick/Axe can be used as both a Pickaxe and an Axe. Each use as chopping will reduce its durability by 0.25%, and will reduce by 0.75% as mining. This means that when used exclusively to either chop or mine it has almost same durability as the Luxury Axe (400) or Opulent Pickaxe (134) respectively (800 and 267 in Don't Starve Together). It also works 33% better than its standard one-function counterpart. In other words, swinging Pick/Axe once is equivalent to swing Pickaxe or Axe 1.33 times. E.g. A Large Evergreen will take 12 swings instead of 15 and standard Boulders in 5 hits instead of 6.

In the Reign of Giants DLC, players have a small chance of finding Green Gems inside Tumbleweeds, thus making Pick/Axes renewable, since more Thulecite can be gained with the use of Construction Amulets and Deconstruction Staves. 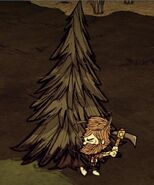 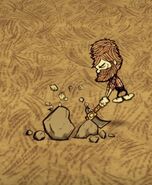 Pick/Axe's previous design, before it was released.

Wilson chopping a tree with the old version of the Pick/Axe. 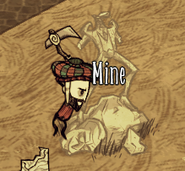 Wilson mining with the old version of the Pick/Axe.
Community content is available under CC-BY-SA unless otherwise noted.
Advertisement