Puts nearby mobs to sleep.

“I can serenade the animals.”

“Music is the window to my empty soul.”

“I CAN REBOOT FLESHLINGS WITH THIS”

“I'm going to sing a song of madness.”

“Proven to produce a sonamolant song.”

“This will be music to something's ears.”

“I haven't spent much time practicing...”

The Pan Flute is a Magic item. It requires 5 Cut Reeds, 1 Mandrake, and 1 Rope to craft, and a Prestihatitator to prototype.

When played, it puts all nearby Mobs to sleep, except for those that are incapable of sleeping.

It takes 1 second to begin playing the Pan Flute after clicking it. Mobs will be put into a deeper sleep than usual, allowing the player to move closer to them without waking them up; for example, the Tallbird.

If a mob that was put to sleep is attacked, all of the similar nearby mobs will wake up after a couple of seconds. Mobs sometimes sleep all day after they have been put to sleep by the Pan Flute.

The Pan Flute can be used to get an advantage over enemies, shave Beefalo, or steal Tallbird Eggs and Pengull Eggs. The Pan Flute also complements the Feather Hat when looking for Morsels and Feathers.

In the Reign of Giants DLC, the Pan Flute has a 75% chance to be found around the Glommer's Statue.

In the Shipwrecked DLC, the Pan Flute can rarely be found when fishing with the Trawl Net, making it renewable.

In the Hamlet DLC, the Pan Flute is renewable since Mandrakes can be bought in 'The Sty' Oddities Emporium for 50 Oincs.

In Don't Starve Together, the Pan Flute has a 100% chance to be found around the Glommer's Statue.

Woven - Elegant
Foolish Flute
As whimsical as it is musical.
See ingame 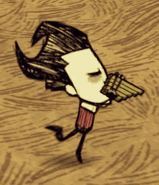